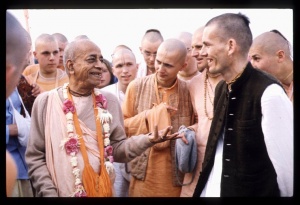 Three among these ten—namely Kavi, Mahāvīra and Savana—lived in complete celibacy. Thus trained in brahmacārī life from the beginning of childhood, they were very conversant with the highest perfection, known as the paramahaṁsa-āśrama.

The word ūrdhva-retasaḥ in this verse is very significant. Ūrdhva-retaḥ refers to one who can control sex life and who instead of wasting semen by discharging it, can use this most important substance accumulated in the body to enrich the brain. One who can completely control sex life is able to work wonderfully with his brain, especially in remembering. Thus students who simply hear Vedic instructions once from their teacher could remember them verbatim without needing to read books, which therefore did not exist in former times.

Another significant word is arbha-bhāvāt, which means "from very childhood." Another meaning is "from being very affectionate to children." In other words, paramahaṁsa life is dedicated for the benefit of others. Just as a father sacrifices many things out of affection for his son, great saintly persons sacrifice all kinds of bodily comforts for the benefit of human society. In this connection there is a verse concerning the six Gosvāmīs:

Because of their compassion for the poor fallen souls. the six Gosvāmīs gave up their exalted positions as ministers and took vows as mendicants. Thus minimizing their bodily wants as far as possible, they each accepted only a loincloth and a begging bowl. Thus they remained in Vṛndāvana to execute the orders of Śrī Caitanya Mahāprabhu by compiling and publishing various Vaiṣṇava literatures.