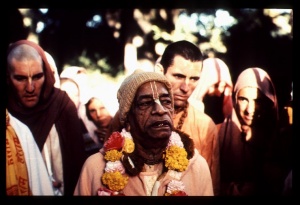 There are many excellent verses, famous all over the world, concerning the activities of Mahārāja Priyavrata. He is so celebrated that his activities are compared to those of the Supreme Personality of Godhead. Sometimes a sincere servant and devotee of the Lord is also called bhagavān. Śrī Nārada is called bhagavān, and Lord Śiva and Vyāsadeva are also sometimes called bhagavān. This designation, bhagavān, is sometimes conferred upon a pure devotee by the grace of the Lord so that he will be very highly esteemed. Mahārāja Priyavrata was such a devotee.