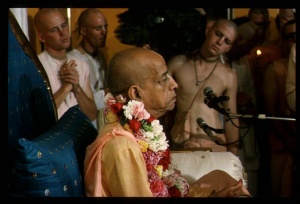 In the forest of the material world, the conditioned soul is sometimes bitten by envious enemies, which are compared to serpents and other creatures. Through the tricks of the enemy, the conditioned soul falls from his prestigious position. Being anxious, he cannot even sleep properly. He thus becomes more and more unhappy, and he gradually loses his intelligence and consciousness. In that state he becomes almost perpetually like a blind man who has fallen into a dark well of ignorance.