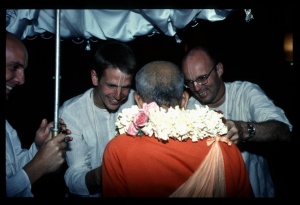 Stealing or cheating another person out of his money, the conditioned soul somehow or other keeps it in his possession and escapes punishment. Then another man, named Devadatta, cheats him and takes the money away. Similarly, another man, named Viṣṇumitra, steals the money from Devadatta and takes it away. In any case, the money does not stay in one place. It passes from one hand to another. Ultimately no one can enjoy the money, and it remains the property of the Supreme Personality of Godhead.

"The Supreme Personality of Godhead is the true beneficiary of all sacrifices and austerities, and He is the supreme proprietor of all the planetary systems."

Foolish materialistic people collect money and steal from other thieves, but they cannot keep it. In any case, it must be spent. One person cheats another, and another person cheats someone else; therefore the best way to possess Lakṣmī is to keep her by the side of Nārāyaṇa. This is the point of the Kṛṣṇa consciousness movement. We worship Lakṣmī (Rādhārāṇī) along with Nārāyaṇa (Kṛṣṇa). We collect money from various sources, but that money does not belong to anyone but Rādhā and Kṛṣṇa (Lakṣmī-Nārāyaṇa). If money is utilized in the service of Lakṣmī-Nārāyaṇa, the devotee automatically lives in an opulent way. However, if one wants to enjoy Lakṣmī the way Rāvaṇa did, he will be vanquished by the laws of nature, and whatever few possessions he has will be taken away. Finally death will take everything away, and death is the representative of Kṛṣṇa.