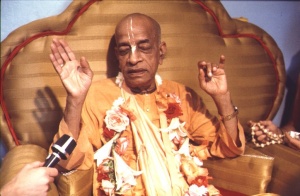 Although people may be enemies, in order to fulfill their desires again and again, they sometimes get married. Unfortunately, these marriages do not last very long, and the people involved are separated again by divorce or other means.

As stated previously, every conditioned soul has the propensity to cheat, even in marriage. Everywhere in this material world, one conditioned soul is envious of another. For the time being, people may remain friends, but eventually they become enemies again and fight over money. Sometimes they marry and then separate by divorce or other means. On the whole, unity is never permanent. Due to the cheating propensity, both parties always remain envious. Even in Kṛṣṇa consciousness, separation and enmity take place due to the prominence of material propensities.