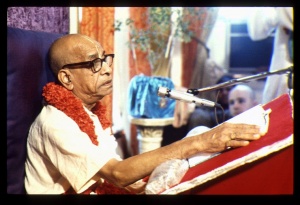 yaḥ—the same Jaḍa Bharata who was formerly Mahārāja Bharata, the son of Mahārāja Ṛṣabhadeva; dustyajān—very difficult to give up; dāra-sutān—the wife and children or the most opulent family life; suhṛt—friends and well-wishers; rājyam—a kingdom that extended all over the world; hṛdi-spṛśaḥ—that which is situated within the core of one's heart; jahau—he gave up; yuvā eva—even as a young man; mala-vat—like stool; uttama-śloka-lālasaḥ—who was so fond of serving the Supreme Personality of Godhead, known as Uttamaśloka.

While in the prime of life, the great Mahārāja Bharata gave up everything because he was fond of serving the Supreme Personality of Godhead, Uttamaśloka. He gave up his beautiful wife, nice children, great friends and an enormous empire. Although these things were very difficult to give up, Mahārāja Bharata was so exalted that he gave them up just as one gives up stool after evacuating. Such was the greatness of His Majesty.

The name of God is Kṛṣṇa, because He is so attractive that the pure devotee can give up everything within this material world on His behalf. Mahārāja Bharata was an ideal king, instructor and emperor of the world. He possessed all the opulences of the material world, but Kṛṣṇa is so attractive that He attracted Mahārāja Bharata from all his material possessions. Yet somehow or other, the King became affectionate to a little deer and, falling from his position, had to accept the body of a deer in his next life. Due to Kṛṣṇa's great mercy upon him, he could not forget his position, and he could understand how he had fallen. Therefore in the next life, as Jaḍa Bharata, Mahārāja Bharata was careful not to spoil his energy, and therefore he presented himself as a deaf and dumb person. In this way he could concentrate on his devotional service. We have to learn from the great King Bharata how to become cautious in cultivating Kṛṣṇa consciousness. A little inattention will retard our devotional service for the time being. Yet any service rendered to the Supreme Personality of Godhead is never lost: svalpam apy asya dharmasya trāyate mahato bhayāt (BG 2.40). A little devotional service rendered sincerely is a permanent asset. As stated in Śrīmad-Bhāgavatam (SB 1.5.17):

Somehow or other, if one is attracted to Kṛṣṇa, whatever he does in devotional service is a permanent asset. Even if one falls down due to immaturity or bad association, his devotional assets are never lost. There are many examples of this—Ajāmila, Mahārāja Bharata, and many others. This Kṛṣṇa consciousness movement is giving everyone a chance to engage in devotional service for at least some time. A little service will give one an impetus to advance and thus make one's life successful.

In this verse the Lord is described as Uttamaśloka. Uttama means "the best," and śloka means "reputation." Lord Kṛṣṇa is full in six opulences, one of which is reputation. Aiśvaryasya samagrasya vīryasya yaśasaḥ śriyaḥ (Viṣṇu Purāṇa 6.5.47). Kṛṣṇa's reputation is still expanding. We are spreading the glories of Kṛṣṇa by pushing forward this Kṛṣṇa consciousness movement. Kṛṣṇa's reputation, five thousand years after the Battle of Kurukṣetra, is still expanding throughout the world. Every important individual within this world must have heard of Kṛṣṇa, especially at the present moment, due to the Kṛṣṇa consciousness movement. Even people who do not like us and want to suppress the movement are also somehow or other chanting Hare Kṛṣṇa. They say, "The Hare Kṛṣṇa people should be chastised." Such foolish people do not realize the true value of this movement, but the mere fact that they want to criticize it gives them a chance to chant Hare Kṛṣṇa, and this is its success.