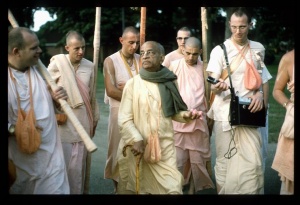 The Prince mistakenly addressed the Apsarā: O best of saintly persons, who are you? Why are you on this hill, and what do you want to do? Are you one of the illusory potencies of the Supreme Personality of Godhead? You seem to be carrying two bows without strings, What is the reason you carry these bows? Is it for some purpose of your own or for the sake of a friend? Perhaps you carry them to kill the mad animals in this forest.

While undergoing severe penances in the forest, Āgnīdhra was captivated by the movements of Pūrvacitti, the girl sent by Lord Brahmā. As stated in Bhagavad-gītā, kāmais tais tair hṛta jñānāḥ: (BG 7.20) when one becomes lusty, he loses his intelligence. Therefore Āgnīdhra, having lost his intelligence, could not distinguish whether Pūrvacitti was male or female. He mistook her for a muni-putra, the son of a saintly person in the forest, and addressed her as muni-varya. Because of her personal beauty, however, he could not believe her to be a boy. He therefore began studying her features. First he saw her two eyebrows, which were so expressive that he wondered whether he or she might be the māyā of the Supreme Personality of Godhead. The words used in this connection are bhagavat-para-devatāyāḥ. Devatāḥ, the demigods, all belong to this material world, whereas Bhagavān, the Supreme Personality of Godhead, Kṛṣṇa, is always beyond this material world and is therefore known as para-devatā. The material world is certainly created by māyā, but it is created under the direction of para-devatā, the Supreme Personality of Godhead. As confirmed in Bhagavad-gītā (mayādhyakṣeṇa prakṛtiḥ sūyate sa-carācaram (BG 9.10)), māyā is not the ultimate authority for the creation of this material world. Māyā acts on behalf of Kṛṣṇa.

Pūrvacitti's eyebrows were so beautiful that Āgnīdhra compared them to bows without strings. He therefore asked her whether they were to be used for her own purposes or for the sake of someone else. Her eyebrows were like bows meant to kill animals in the forest. This material world is like a great forest, and its inhabitants are like forest animals such as deer and tigers meant to be killed. The killers are the eyebrows of beautiful women. Captivated by the beauty of the fair sex, all the men of the world are killed by bows without strings, but cannot see how they are killed by māyā. It is a fact, however, that they are being killed (bhūtvā bhūtvā pralīyate)(BG 8.19). By dint of his tapasya, Āgnīdhra could understand how māyā acts under the direction of the Supreme Personality of Godhead.

The word pramattān is also significant. pramatta refers to one who cannot control his senses. The entire material world is being exploited by people who are pramatta, or vimūḍha. Prahlāda Mahārāja therefore said:

"They are rotting in material activities for transient material pleasure and spoiling their lives toiling all day and night simply for sense gratification, with no attachment for love of Godhead. I am simply lamenting for them and devising various plans to deliver them from the clutches of māyā." (SB 7.9.43) Karmīs who act very seriously for sense gratification are always referred to in the śāstras by such terms as pramatta, vimukha and vimūḍha. They are killed by māyā. However, one who is apramatta, a sane, sober person, a dhīra, knows very well that a human being's primary duty is to render service to the Supreme Person. Māyā is always ready to kill those who are pramatta with her invisible bows and arrows. Āgnīdhra questioned Pūrvacitti about this.