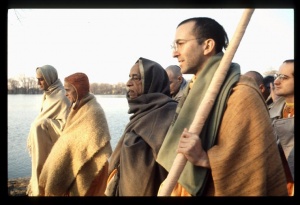 [The inhabitants of Krauñcadvīpa worship with this mantra.] O water of the rivers, you have obtained energy from the Supreme Personality of Godhead. Therefore you purify the three planetary systems, known as Bhūloka, Bhuvarloka and Svarloka. By your constitutional nature, you take away sins, and that is why we are touching you. Kindly continue to purify us.

The energy of the Lord acts throughout the creation, just as heat and light, the energies of the sun, act within the universe and make everything work. The specific rivers mentioned in the śāstras are also energies of the Supreme Personality of Godhead, and people who regularly bathe in them are purified. It can actually be seen that many people are cured of diseases simply by bathing in the Ganges. Similarly, the inhabitants of Krauñcadvīpa purify themselves by bathing in the rivers there.