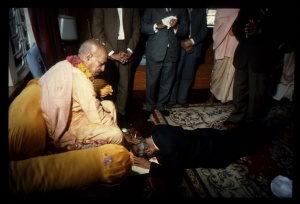 Plakṣadvīpa is surrounded by an ocean of sugarcane juice, equal in breadth to the island itself. Similarly, there is then another island—Sālmalīdvīpa—twice as broad as Plakṣadvīpa [400,000 yojanas, or 3,200,000 miles] and surrounded by an equally broad body of water called Surāsāgara, the ocean that tastes like liquor.