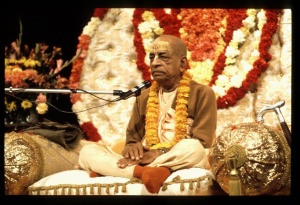 This manifestation of subtle and gross matter exists within the Supreme Personality of Godhead. Out of causeless mercy toward His devotees, He exhibits various forms, which are all transcendental. The Supreme Lord is most liberal, and He possesses all mystic power. To conquer the minds of His devotees and give pleasure to their hearts, He appears in different incarnations and manifests many pastimes.

Śrīla Jīva Gosvāmī has translated this verse as follows. "The Supreme Personality of Godhead is the cause of all causes. It is by His will that gross and subtle ingredients interact. He appears in various incarnations just to please the hearts of His pure devotees." For example, the Supreme Lord appeared in the transcendental incarnation of Lord Varāha (the boar) just to please His devotees by lifting the planet earth from the Garbhodaka Ocean.