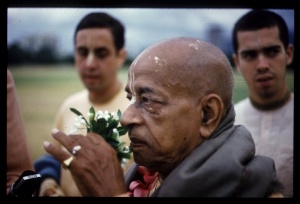 My dear King, I have thus described how people generally act according to their different desires and, as a result, get different types of bodies in higher or lower planets. You inquired of these things from me, and I have explained to you whatever I have heard from authorities. What shall I speak of now?

Thus end the Bhaktivedanta purports of the Fifth Canto, Twenty-fifth Chapter of the Śrīmad-Bhāgavatam, entitled "The Glories of Lord Ananta."