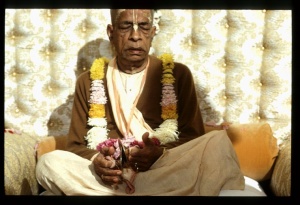 Śrī Śukadeva Gosvāmī said: As soon as the Lord was born as the son of Mahārāja Nābhi, He manifested symptoms of the Supreme Lord, such as marks on the bottoms of His feet [the flag, thunderbolt, etc.]. This son was equal to everyone and very peaceful. He could control His senses and His mind, and, possessing all opulence, He did not hanker for material enjoyment. Endowed with all these attributes, the son of Mahārāja Nābhi became more powerful day after day. Due to this, the citizens, learned brāhmaṇas, demigods and ministers wanted Ṛṣabhadeva to be appointed ruler of the earth.

In these days of cheap incarnations, it is very interesting to note the bodily symptoms found in an incarnation. From the very beginning of His birth, it was observed that Ṛṣabhadeva's feet were marked with the transcendental signs (a flag, thunderbolt, lotus flower, etc.). In addition to this, as the Lord began to grow, He became very prominent. He was equal to everyone. He did not favor one person and neglect another. An incarnation of God must have the six opulences—wealth. strength, knowledge, beauty, fame and renunciation. It is said that although Ṛṣabhadeva was endowed with all opulences, He was not at all attached to material enjoyment. He was self-controlled and therefore liked by everyone. Due to His superexcellent qualities, everyone wanted Him to rule the earth. An incarnation of God has to be accepted by experienced people and by the symptoms described in the śāstras. An incarnation is not accepted simply by the adulation of foolish people.