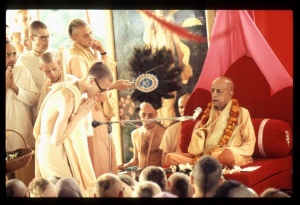 When a person is in deep sleep, he dreams and sees in himself many other objects, such as great mountains and rivers or perhaps even the entire universe, although they are far away. Sometimes when one awakens from a dream he sees that he is in a human form, lying in his bed in one place. Then he sees himself, in terms of various conditions, as belonging to a particular nationality, family and so on. All the conditions of deep sleep, dreaming and wakefulness are but energies of the Supreme Personality of Godhead. One should always remember the original creator of these conditions, the Supreme Lord, who is unaffected by them.

None of these conditions of the living entities—namely, deep sleep, dreaming and wakefulness—is substantial. They are simply displays of various phases of conditional life. There may be many mountains, rivers, trees, bees, tigers and snakes that are situated far away, but in a dream one may imagine them to be nearby. Similarly, as one has subtle dreams at night, when the living entity is awake he lives in gross dreams of nation, community, society, possessions, skyscrapers, bank balance, position and honor. Under the circumstances, one should know that his position is due to his contact with the material world. One is situated in different positions in various forms of life that are all but creations of the illusory energy, which works under the direction of the Supreme Personality of Godhead. Therefore the Supreme Lord is the ultimate actor, and the conditioned living entity should simply remember this original actor, Śrī Kṛṣṇa. As living entities, we are being carried away by the waves of prakṛti, or nature, which works under the Lord's direction (mayādhyakṣeṇa prakṛtiḥ sūyate sa-carācaram (BG 9.10)). Bhaktivinoda Ṭhākura sings, (miche) māyāra vaśe, yāccha bhese', khāccha hābuḍubu, bhāi: "Why are you being carried away by the waves of the illusory energy in various phases of dreaming and wakefulness? These are all creations of māyā." Our only duty is to remember the supreme director of this illusory energy—Kṛṣṇa. For us to do this, the śāstra advises us, harer nāma harer nāma harer nāmaiva kevalam (CC Adi 17.21): one should constantly chant the holy name of the Lord—Hare Kṛṣṇa, Hare Kṛṣṇa, Kṛṣṇa Kṛṣṇa, Hare Hare/ Hare Rāma, Hare Rāma, Rāma Rāma, Hare Hare. The Supreme Lord is realized in three different phases, as Brahman, Paramātmā and Bhagavān, but Bhagavān is the ultimate realization. One who realizes Bhagavān—the Supreme Personality of Godhead, Kṛṣṇa—is the most perfect mahātmā (vāsudevaḥ sarvam iti sa mahātmā sudurlabhaḥ (BG 7.19)). In the human form of life, one should understand the Supreme Personality of Godhead, for then one will understand everything else. Yasmin vijñāte sarvam evaṁ vijñātaṁ bhavati (Muṇḍaka Upaniṣad 1.3). According to this Vedic injunction, simply by understanding Kṛṣṇa one understands Brahman, Paramātmā, prakṛti, the illusory energy, the spiritual energy and everything else. Everything will be revealed. Prakṛti, the material nature, is working under the direction of the Supreme Lord, and we living entities are being carried away by various phases of prakṛti. For self-realization, one should always remember Kṛṣṇa. As stated in Padma Purāṇa, smartavyaḥ satataṁ viṣṇuḥ: we should always remember Lord Viṣṇu. Vismartavyo na jātucit: we should never forget the Lord. This is the perfection of life.