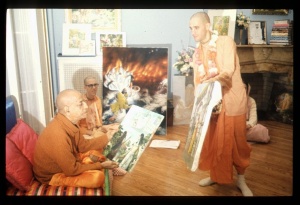 Śukadeva Gosvāmī said: When the ten sons of Prācīnabarhi emerged from the waters, in which they were performing austerities, they saw that the entire surface of the world was covered by trees.

When King Prācīnabarhi was performing Vedic rituals in which the killing of animals was recommended, Nārada Muni, out of compassion, advised him to stop. Prācīnabarhi understood Nārada properly and then left the kingdom to perform austerities in the forest. His ten sons, however, were performing austerities within the water, and therefore there was no king to see to the management of the world. When the ten sons, the Pracetās, came out of the water, they saw that the earth was overrun with trees.

When the government neglects agriculture, which is necessary for the production of food, the land becomes covered with unnecessary trees. Of course, many trees are useful because they produce fruits and flowers, but many other trees are unnecessary. They could be used as fuel and the land cleared and used for agriculture. When the government is negligent, less grain is produced. As stated in Bhagavad-gītā (BG 18.44), kṛṣi-go-rakṣya-vāṇijyaṁ vaiśya-karma svabhāva jam: the proper engagements for vaiśyas, according to their nature, are to farm and to protect cows. The duty of the government and the kṣatriyas is to see that the members of the third class, the vaiśyas, who are neither brāhmaṇas nor kṣatriyas, are thus properly engaged. Kṣatriyas are meant to protect human beings, whereas vaiśyas are meant to protect useful animals, especially cows.