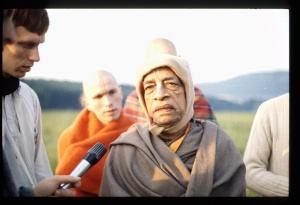 In that holy place, the Haryaśvas began regularly touching the lake's waters and bathing in them. Gradually becoming very much purified, they became inclined toward the activities of paramahaṁsas. Nevertheless, because their father had ordered them to increase the population, they performed severe austerities to fulfill his desires. One day, when the great sage Nārada saw those boys performing such fine austerities to increase the population, Nārada approached them.