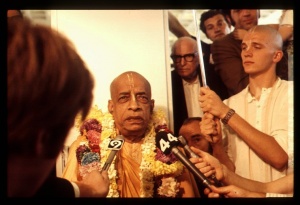 Prahlāda Mahārāja replied: Because of their uncontrolled senses, persons too addicted to materialistic life make progress toward hellish conditions and repeatedly chew that which has already been chewed. Their inclinations toward Kṛṣṇa are never aroused, either by the instructions of others, by their own efforts, or by a combination of both.

In this verse the words matir na kṛṣṇe refer to devotional service rendered to Kṛṣṇa. So-called politicians, erudite scholars and philosophers who read Bhagavad-gītā try to twist some meaning from it to suit their material purposes, but their misunderstandings of Kṛṣṇa will not yield them any profit. Because such politicians, philosophers and scholars are interested in using Bhagavad-gītā as a vehicle for adjusting things materially, for them constant thought of Kṛṣṇa, or Kṛṣṇa consciousness, is impossible (matir na kṛṣṇe). As stated in Bhagavad-gītā (BG 18.55), bhaktyā mām abhijānāti: only through devotional service can one understand Kṛṣṇa as He is. The so-called politicians and scholars think of Kṛṣṇa as fictitious. The politician says that his Kṛṣṇa is different from the Kṛṣṇa depicted in Bhagavad-gītā. Even though he accepts Kṛṣṇa and Rāma as the Supreme he thinks of Rāma and Kṛṣṇa as impersonal because he has no idea of service to Kṛṣṇa. Thus his only business is punaḥ punaś carvita-carvaṇānām—chewing the chewed again and again. The aim of such politicians and academic scholars is to enjoy this material world with their bodily senses. Therefore it is clearly stated here that those who are gṛha-vrata, whose only aim is to live comfortably with the body in the material world, cannot understand Kṛṣṇa. The two expressions gṛha-vrata and carvita-carvaṇānām indicate that a materialistic person tries to enjoy sense gratification in different bodily forms, life after life, but is still unsatisfied. In the name of personalism, this ism or that ism, such persons always remain attached to the materialistic way of life. As stated in Bhagavad-gītā (BG 2.44):

"In the minds of those who are too attached to sense enjoyment and material opulence, and who are bewildered by such things, the resolute determination for devotional service to the Supreme Lord does not take place." Those who are attached to material enjoyment cannot be fixed in devotional service to the Lord. They cannot understand Bhagavān, Kṛṣṇa, or His instruction, Bhagavad-gītā. Adānta-gobhir viśatāṁ tamisram: their path actually leads toward hellish life.

As confirmed by Ṛṣabhadeva, mahat-sevāṁ dvāram āhur vimukteḥ: (SB 5.5.2) one must try to understand Kṛṣṇa by serving a devotee. The word mahat refers to a devotee.

"O son of Pṛthā, those who are not deluded, the great souls, are under the protection of the divine nature. They are fully engaged in devotional service because they know Me as the Supreme Personality of Godhead, original and inexhaustible." (BG 9.13) A mahātmā is one who is constantly engaged in devotional service, twenty-four hours a day. As explained in the following verses, unless one adheres to such a great personality, one cannot understand Kṛṣṇa. Hiraṇyakaśipu wanted to know where Prahlāda had gotten this Kṛṣṇa consciousness. Who had taught him? Prahlāda sarcastically replied, "My dear father, persons like you never understand Kṛṣṇa. One can understand Kṛṣṇa only by serving a mahat, a great soul. Those who try to adjust material conditions are said to be chewing the chewed. No one has been able to adjust material conditions, but life after life, generation after generation, people try and repeatedly fail. Unless one is properly trained by a mahat—a mahātmā, or unalloyed devotee of the Lord—there is no possibility of one's understanding Kṛṣṇa and His devotional service."