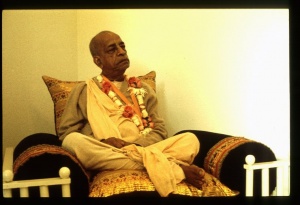 My mother, being pregnant, desired the safety of her embryo and desired to give birth after her husband's arrival. Thus she stayed at Nārada Muni's āśrama, where she rendered service unto Nārada Muni with great devotion.

One should not remain in a secluded place with a woman, even one's mother, sister, or daughter. Nonetheless, although one is strictly prohibited from staying with a woman in a secluded place, Nārada Muni gave shelter to Prahlāda Mahārāja's young mother, who rendered service to him with great devotion and faith. Does this mean that Nārada Muni transgressed the Vedic injunctions? Certainly he did not. Such injunctions are intended for mundane creatures, but Nārada Muni is transcendental to mundane categories. Nārada Muni is a great saint and is transcendentally situated. Therefore, although he was a young man, he could give shelter to a young woman and accept her service. Haridāsa Ṭhākura also spoke with a young woman, a prostitute, in the dead of night, but the woman could not deviate his mind. Instead, she became a Vaiṣṇavī, a pure devotee, by the benediction of Haridāsa Ṭhākura. Ordinary persons, however, should not imitate such highly elevated devotees. Ordinary persons must strictly observe the rules and regulations by staying aloof from the association of women. No one should imitate Nārada Muni or Haridāsa Ṭhākura. It is said, vaiṣṇavera kriyā-mudrā vijñe nā bujhaya. Even if a man is very advanced in learning, he cannot understand the behavior of a Vaiṣṇava. Anyone can take shelter of a pure Vaiṣṇava, without fear. Therefore in the previous verse it has been distinctly said, devarṣer antike sākuto-bhayā: Kayādhu, the mother of Prahlāda Mahārāja, stayed under the protection of Nārada Muni without fear from any direction. Similarly, Nārada Muni, in his transcendental position, stayed with the young woman without fear of deviation. Nārada Muni, Haridāsa Ṭhākura and similar ācāryas especially empowered to broadcast the glories of the Lord cannot be brought down to the material platform. Therefore one is strictly forbidden to think that the ācārya is an ordinary human being (guruṣu nara-matiḥ).