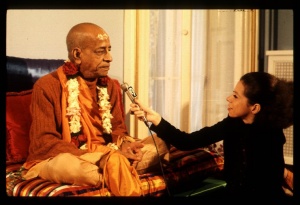 These words of Prahlāda Mahārāja are very important in regard to knowledge descending by the disciplic succession. Even when Prahlāda Mahārāja was a baby within the womb of his mother, he became fully convinced of the existence of the supreme power because of hearing the powerful instructions of Nārada and understood how to attain perfection in life by bhakti-yoga. These are the most important understandings in spiritual knowledge.

"Unto those great souls who have implicit faith in both the Lord and the spiritual master, all the imports of Vedic knowledge are automatically revealed." (Śvetāśvatara Upaniṣad 6.23)

"No one can understand Kṛṣṇa as He is by the blunt material senses. But He reveals Himself to the devotees, being pleased with them for their transcendental loving service unto Him." (Bhakti-rasāmṛta-sindhu 1.2.234)

"One can understand the Supreme Personality as He is only by devotional service. And when one is in full consciousness of the Supreme Lord by such devotion, he can enter into the kingdom of God." (BG 18.55)

These are Vedic instructions. One must have full faith in the words of the spiritual master and similar faith in the Supreme Personality of Godhead. Then the real knowledge of ātmā and Paramātmā and the distinction between matter and spirit will be automatically revealed. This ātma-tattva, or spiritual knowledge, will be revealed within the core of a devotee's heart because of his having taken shelter of the lotus feet of a mahājana such as Prahlāda Mahārāja.

In this verse the word bhūyāt may be understood to mean "let there be." Prahlāda Mahārāja offers his blessings to his class friends, saying, "Also become faithful like me. Become bona fide Vaiṣṇavas." A devotee of the Lord desires for everyone to take to Kṛṣṇa consciousness. Unfortunately, however, people sometimes do not have staunch faith in the words of the spiritual master who comes by the disciplic succession, and therefore they are unable to understand transcendental knowledge. The spiritual master must be in the line of authorized disciplic succession, like Prahlāda Mahārāja, who received the knowledge from Nārada. If the class friends of Prahlāda Mahārāja, the sons of demons, were to accept the truth through Prahlāda, they would certainly also become fully aware of transcendental knowledge.