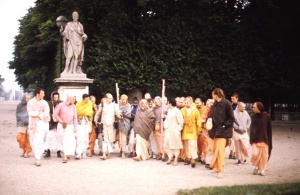 Through polluted intelligence one is subjected to the modes of nature, and thus one is conditioned by material existence. Like a dreaming state in which one falsely suffers, material existence, which is due to ignorance, must be considered unwanted and temporary.

The unwanted condition of temporary life is called ignorance. One can very easily understand that the material body is temporary, for it is generated at a certain date and ends at a certain date, after undergoing the six kinds of change, namely birth, death, growth, maintenance, transformation and dwindling. This condition of the eternal soul is due to his ignorance, and although it is temporary, it is unwanted. Because of ignorance one is put into temporary bodies one after another. The spirit soul, however, does not need to enter such temporary bodies. He does so only due to his ignorance or his forgetfulness of Kṛṣṇa. Therefore in the human form of life, when one's intelligence is developed, one should change his consciousness by trying to understand Kṛṣṇa. Then one can be liberated. This is confirmed in Bhagavad-gītā (BG 4.9), where the Lord says:

"One who knows the transcendental nature of My appearance and activities does not, upon leaving the body, take his birth again in this material world, but attains My eternal abode, O Arjuna." Unless one understands Kṛṣṇa and comes to Kṛṣṇa consciousness, one must continue in material bondage. To end this conditional life, one must surrender to the Supreme Personality of Godhead. Indeed, that is demanded by the Supreme Lord. Sarva-dharmān parityajya mām ekaṁ śaraṇaṁ vraja (BG 18.66).

As advised by Mahārāja Ṛṣabhadeva, na sādhu manye yata ātmano 'yam asann api kleśada āsa dehaḥ (SB 5.5.4). One must be intelligent enough to understand that although one's body is temporary and will not endure for long, as long as one has a body he must undergo the pangs of material existence. Therefore, if by good association, by the instructions of a bona fide spiritual master, one takes to Kṛṣṇa consciousness, his conditional life of material existence is vanquished, and his original consciousness, known as Kṛṣṇa consciousness, is revived. When one is Kṛṣṇa conscious, he can realize that material existence, whether one is awake or dreaming, is nothing but a dream and has no factual value. This realization is possible by the grace of the Supreme Lord. This grace is also present in the form of the instructions of Bhagavad-gītā. Therefore Śrī Caitanya Mahāprabhu's mission is for everyone to engage in welfare activities to awaken the foolish living entity, especially in human society, so that he may come to the platform of Kṛṣṇa consciousness and benefit by liberation from conditional life.

In this connection, Śrīla Madhvācārya cites the following verses:

One must realize that the material condition of life is full of distresses. One can realize this with purified intelligence. When one's intelligence is purified, he can understand that unwanted, temporary, material life is just like a dream. Just as one suffers pain when his head is cut off in a dream, in ignorance one suffers not only while dreaming but also while awake. Without the mercy of the Supreme Personality of Godhead, one continues in ignorance and is thus subjected to material distresses in various ways.