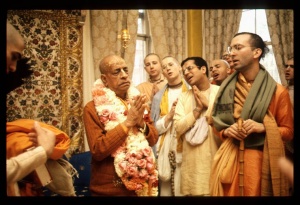 One who is situated in devotional service is certainly the controller of his senses, and thus he is a liberated person. When such a liberated person, the pure devotee, hears of the transcendental qualities and activities of the Lord's incarnations for the performance of various pastimes, his hair stands on end on his body, tears fall from his eyes, and in his spiritual realization his voice falters. Sometimes he very openly dances, sometimes he sings loudly, and sometimes he cries. Thus he expresses his transcendental jubilation.