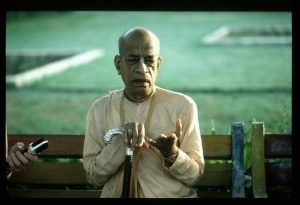 In this material world, to render service to the lotus feet of Govinda, the cause of all causes, and to see Him everywhere, is the only goal of life. This much alone is the ultimate goal of human life, as explained by all the revealed scriptures.

In this verse the words sarvatra tad-īkṣaṇam describe the highest perfection of devotional service, in which one sees everything with reference to Govinda's activities. The highly elevated devotee never sees anything unrelated to Govinda.

"The mahā-bhāgavata, the advanced devotee, certainly sees everything mobile and immobile, but he does not exactly see their forms. Rather, everywhere he immediately sees manifest the form of the Supreme Lord." (CC Madhya 8.274) Even in this material world, a devotee does not see materially manifested things; instead he sees Govinda in everything. When he sees a tree or a human being, a devotee sees them in relation to Govinda. Govindam ādi-puruṣam: Govinda is the original source of everything.

"Kṛṣṇa, who is known as Govinda, is the supreme controller. He has an eternal, blissful, spiritual body. He is the origin of all. He has no other origin, for He is the prime cause of all causes." (BS 5.1) The test of a perfect devotee is that he sees Govinda everywhere in this universe, even in every atomic particle (aṇḍa-ntara-stha-paramāṇu-cayāntara-stham). This is the perfect vision of a devotee. It is therefore said:

A devotee sees everyone and everything in relationship with Nārāyaṇa (nārāyaṇam ayam). Everything is an expansion of Nārāyaṇa's energy. Just as those who are greedy see everything as a source of money-making and those who are lusty see everything as being conducive to sex, the most perfect devotee, Prahlāda Mahārāja, saw Nārāyaṇa even within a stone column. This does not mean, however, that we must accept the words daridra-nārāyaṇa, which have been manufactured by some unscrupulous person. One who actually envisions Nārāyaṇa everywhere makes no distinction between the poor and the rich. To single out the daridra-nārāyaṇas, or poor Nārāyaṇa, and reject the dhani-nārāyaṇa, or rich Nārāyaṇa, is not the vision of a devotee. Rather, that is the imperfect vision of materialistic persons.

Thus end the Bhaktivedanta purports of the Seventh Canto, Seventh Chapter, of the Śrīmad-Bhāgavatam, entitled "What Prahlāda Learned in the Womb."