Srimad-Bhagavatam - Eighth Canto - Chapter 10: The Battle Between the Demigods and the Demons 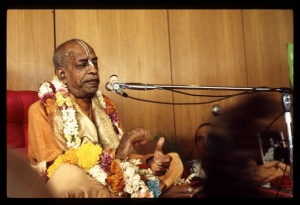 Both parties in that fight were extremely angry at heart, and in enmity they beat one another with swords, arrows and varieties of other weapons.

There are always two kinds of men in this universe, not only on this planet but also in higher planetary systems. All the kings dominating planets like the sun and moon also have enemies like Rāhu. It is because of occasional attacks upon the sun and moon by Rāhu that eclipses take place. The fighting between the demons and demigods is perpetual; it cannot be stopped unless intelligent persons from both sides take to Kṛṣṇa consciousness.