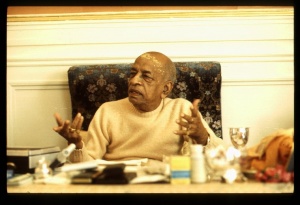 Because of the favor of the brāhmaṇas, the great soul Bali Mahārāja, thinking himself very satisfied, became very opulent and prosperous and began to enjoy the kingdom.

The brāhmaṇas are called dvija-deva, and kṣatriyas are generally called nara-deva. The word deva actually refers to the Supreme Personality of Godhead. The brāhmaṇas guide human society in becoming happy by satisfying Lord Viṣṇu, and according to their advice, the kṣatriyas, who are called nara-deva, keep law and order so that other people, namely the vaiśyas and śūdras, may properly follow regulative principles. In this way, people are gradually elevated to Kṛṣṇa consciousness.