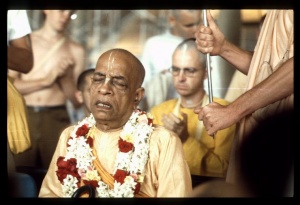 Trikūṭa Mountain has many lakes and rivers, with beaches covered by small gems resembling grains of sand. The water is as clear as crystal, and when the demigod damsels bathe in it, their bodies lend fragrance to the water and the breeze, thus enriching the atmosphere.

Even in the material world, there are many grades of living entities. The human beings on earth generally cover themselves with external fragrances to stop their bad bodily odors, but here we find that because of the bodily fragrance of the demigod damsels, the rivers, the lakes, the breeze and the entire atmosphere of Trikūṭa Mountain also become fragrant. Since the bodies of the damsels in the upper planetary systems are so beautiful, we can just imagine how beautifully formed are the bodies of the Vaikuṇṭha damsels or the damsels in Vṛndāvana, the gopīs.