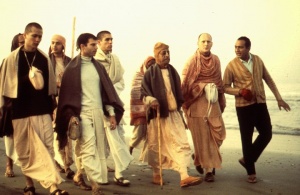 The Gandharvas, the Kimpuruṣas and the Kinnaras sounded thousands and thousands of kettledrums and trumpets again and again, and they sang in great jubilation, declaring, "How exalted a person is Bali Mahārāja, and what a difficult task he has performed! Even though he knew that Lord Viṣṇu was on the side of his enemies, he nonetheless gave the Lord the entire three worlds in charity."