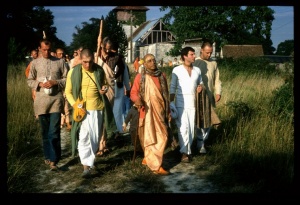 O King, the water from Lord Brahmā's kamaṇḍalu washed the lotus feet of Lord Vāmanadeva, who is known as Urukrama, the wonderful actor. Thus that water became so pure that it was transformed into the water of the Ganges, which went flowing down from the sky, purifying the three worlds like the pure fame of the Supreme Personality of Godhead.

Here we understand that the Ganges began when the water from Lord Brahmā's kamaṇḍalu washed the lotus feet of Lord Vāmanadeva. But in the Fifth Canto it is stated that the Ganges began when Vāmanadeva's left foot pierced the covering of the universe so that the transcendental water of the Causal Ocean leaked through. And elsewhere it is also stated that Lord Nārāyaṇa appeared as the water of the Ganges. The water of the Ganges, therefore, is a combination of three transcendental waters, and thus the Ganges is able to purify the three worlds. This is the description given by Śrīla Viśvanātha Cakravartī Ṭhākura.