Srimad-Bhagavatam - Eighth Canto - Chapter 5: The Demigods Appeal to the Lord for Protection 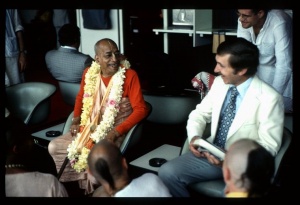 O Mahārāja Parīkṣit, subduer of all enemies, after Lord Brahmā finished speaking to the demigods, he took them with him to the abode of the Supreme Personality of Godhead, which is beyond this material world. The Lord's abode is on an island called Śvetadvīpa, which is situated in the ocean of milk.

Mahārāja Parīkṣit is addressed here as arindama, "subduer of all enemies." Not only do we have enemies outside of our bodies, but within our bodies there are many enemies, such as lusty desires, anger and greed. Mahārāja Parīkṣit is specifically addressed as arindama because in his political life he was able to subdue all kinds of enemies, and even though he was a young king, as soon as he heard that he was going to die within seven days, he immediately left his kingdom. He did not follow the dictates of enemies within his body, such as lust, greed and anger. He was not at all angry with the muni's son who had cursed him. Rather, he accepted the curse and prepared for his death in the association of Śukadeva Gosvāmī. Death is inevitable; no one can surpass the force of death. Therefore Mahārāja Parīkṣit, while fully alive, wanted to hear Śrīmad-Bhāgavatam. He is consequently addressed here as arindama.

Another word, sura-priya, is also significant. Although Kṛṣṇa, the Supreme Personality of Godhead, is equal toward everyone, He is especially inclined toward His devotees (ye bhajanti tu māṁ bhaktyā mayi te teṣu cāpy aham). The devotees are all demigods. There are two kinds of men within this world. One is called the deva, and the other is called the asura. The Padma Purāṇa states:

Anyone who is a devotee of Lord Kṛṣṇa is called a deva, and others, even though they may be devotees of demigods, are called asuras. Rāvaṇa, for example, was a great devotee of Lord Śiva, but he is described as an asura. Similarly, Hiraṇyakaśipu is described as a great devotee of Lord Brahmā, yet he was also an asura. Therefore, only the devotee of Lord Viṣṇu is called sura, not asura. Lord Kṛṣṇa is very much pleased with His devotees, even if they are not on the topmost stage of devotional service. Even on the lower stages of devotional service one is transcendental, and if one continues with devotional life, he continues to be a deva or sura. If one continues in this way, Kṛṣṇa will always be pleased with him and will give him all instructions so that he may very easily return home, back to Godhead.