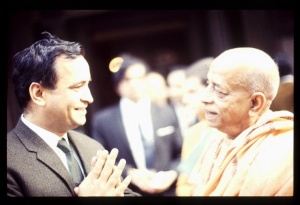 Vedic etiquette enjoins: gṛhe śatrum api prāptaṁ viśvastam akutobhayam. When enemies come to their opponent's place, they should be received in such a way that they will forget that there is animosity between the two parties. Bali Mahārāja was well conversant with the arts of peacemaking and fighting. Thus he received the demigods very well, although his commanders and captains were agitated. This kind of treatment was prevalent even during the fight between the Pāṇḍavas and the Kurus. During the day, the Pāṇḍavas and Kurus would fight with the utmost strength, and when the day was over they would go to each other's camps as friends and be received as such. During such friendly meetings, one enemy would offer anything the other enemy wanted. That was the system.