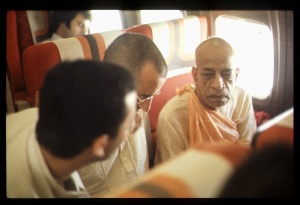 O Mahārāja Parīkṣit, chastiser of enemies, the demigods and the demons thereafter made an armistice between them. Then, with great enterprise, they arranged to produce nectar, as proposed by Lord Indra.

The word saṁvidam is significant in this verse. The demigods and demons both agreed to stop fighting, at least for the time being, and endeavored to produce nectar. Śrīla Viśvanātha Cakravartī Ṭhākura notes in this connection:

The word saṁvit is variously used to mean "in fighting," "in promising," "for satisfying," "in addressing," "by practical action," "indication," and "knowledge."