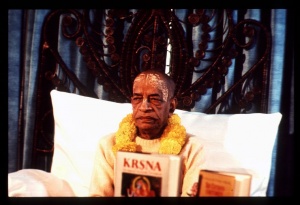 Here is proof of the omnipotence of the Supreme Personality of Godhead, who is above everyone. There are two classes of living entities—the demons and the demigods—and the Supreme Personality of Godhead is above them both. The demons believe in the "chance" theory of creation, whereas the demigods believe in creation by the hand of the Supreme Personality of Godhead. The omnipotence of the Supreme Lord is proved here, for simply with one hand He lifted Mandara Mountain, the demigods and the demons, placed them on the back of Garuḍa and brought them to the ocean of milk. Now, the demigods, the devotees, would immediately accept this incident, knowing that the Lord can lift anything, however heavy it might be. But although demons were also carried along with the demigods, demons, upon hearing of this incident, would say that it is mythological. But if God is all-powerful, why would it be difficult for Him to lift a mountain? Since He is floating innumerable planets with many hundreds and thousands of Mandara Mountains, why can't He lift one of them with His hand? This is not mythology, but the difference between the believers and the faithless is that the devotees accept the incidents mentioned in the Vedic literatures to be true, whereas the demons simply argue and label all these historical incidents mythology. Demons would prefer to explain that everything happening in the cosmic manifestation takes place by chance, but demigods, or devotees, never consider anything to be chance. Rather, they know that everything is an arrangement of the Supreme Personality of Godhead. That is the difference between the demigods and the demons.