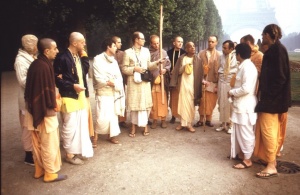 When one is distressed he goes to the church or temple to worship the Lord, but when opulent he forgets the Lord. Therefore, punishment by the Lord through material nature is necessary in human society, for without it men forget the supremacy of the Lord due to their dull, blunt intelligence.