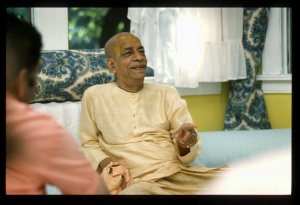 After giving Vibhīṣaṇa the power to rule the Rākṣasa population of Laṅkā for the duration of one kalpa, Lord Rāmacandra, the Supreme Personality of Godhead [Bhagavān], placed Sītādevī on an airplane decorated with flowers and then got on the plane Himself. The period for His living in the forest having ended, the Lord returned to Ayodhyā, accompanied by Hanumān, Sugrīva and His brother Lakṣmaṇa.