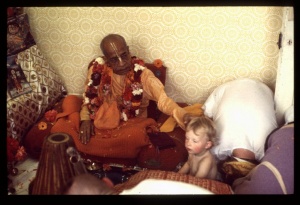 To keep the promise of His father intact, Lord Rāmacandra immediately gave up the position of king and, accompanied by His wife, mother Sītā, wandered from one forest to another on His lotus feet, which were so delicate that they were unable to bear even the touch of Sītā's palms. The Lord was also accompanied by Hanumān [or by another monkey, Sugrīva], king of the monkeys, and by His own younger brother Lord Lakṣmaṇa, both of whom gave Him relief from the fatigue of wandering in the forest. Having cut off the nose and ears of Śūrpaṇakhā, thus disfiguring her, the Lord was separated from mother Sītā. He therefore became angry, moving His eyebrows and thus frightening the ocean, who then allowed the Lord to construct a bridge to cross the ocean. Subsequently, the Lord entered the kingdom of Rāvaṇa to kill him, like a fire devouring a forest. May that Supreme Lord, Rāmacandra, give us all protection.