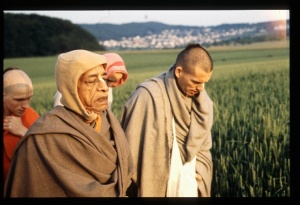 Thus Jamadagni, being worshiped by Lord Paraśurāma, was brought back to life with full remembrance, and he became one of the seven sages in the group of seven stars.

The seven stars revolving around the polestar at the zenith are called saptarṣi-maṇḍala. On these seven stars, which form the topmost part of our planetary system, reside seven sages: Kaśyapa, Atri, Vasiṣṭha, Viśvāmitra, Gautama, Jamadagni and Bharadvāja. These seven stars are seen every night, and they each make a complete orbit around the polestar within twenty-four hours. Along with these seven stars, all the others stars also orbit from east to west. The upper portion of the universe is called the north, and the lower portion is called the south. Even in our ordinary dealings, while studying a map, we regard the upper portion of the map as north.