Srimad-Bhagavatam - Ninth Canto - Chapter 2: The Dynasties of the Sons of Manu 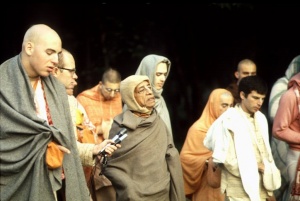 In that sacrifice, King Indra became intoxicated by drinking a large quantity of soma-rasa. The brāhmaṇas received ample contributions, and therefore they were satisfied. For that sacrifice, the various demigods who control the winds offered foodstuffs, and the Viśvedevas were members of the assembly.