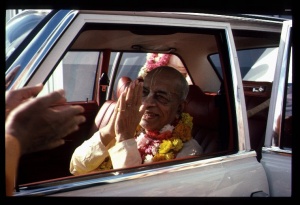 yasya—by whom; īritā—had been explained; sāṅkhya-mayī—having the form of the philosophy analyzing the material world (Sāṅkhya philosophy); dṛḍhā—very strong (to deliver people from this material world); iha—in this material world; nauḥ—a boat; yayā—by which; mumukṣuḥ—a person desiring to be liberated; tarate—can cross over; duratyayam—very difficult to cross; bhava-arṇavam—the ocean of nescience; mṛtyu-patham—a material life of repeated birth and death; vipaścitaḥ—of a learned person; parātma-bhūtasya—who has been elevated to the transcendental platform; katham—how; pṛthak-matiḥ—a sense of distinction (between enemy and friend).

Kapila Muni enunciated in this material world the Sāṅkhya philosophy, which is a strong boat with which to cross over the ocean of nescience. Indeed, a person eager to cross the ocean of the material world may take shelter of this philosophy. In such a greatly learned person, situated on the elevated platform of transcendence, how can there be any distinction between enemy and friend?

One who is promoted to the transcendental position (brahma-bhūta (SB 4.30.20)) is always jubilant (prasannātmā). He is unaffected by the false distinctions between good and bad in the material world. Therefore, such an exalted person is samaḥ sarveṣu bhūteṣu; that is to say, he is equal toward everyone, not distinguishing between friend and enemy. Because he is on the absolute platform, free from material contamination, he is called parātma-bhūta or brahma-bhūta. Kapila Muni, therefore, was not at all angry at the sons of Sagara Mahārāja; rather, they were burnt to ashes by the heat of their own bodies.