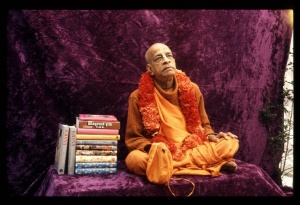 When one actually becomes purely Kṛṣṇa conscious, no one has any right to rule over him. When situated in Kṛṣṇa consciousness, one is no longer in the darkness of ignorance, and when freed from all such darkness, one is situated in his original position. Jīvera 'svarūpa' haya-kṛṣṇera 'nitya-dāsa.' (CC Madhya 20.108). The living entity is eternally the servant of the Lord, and thus when he engages himself in the service of the Lord in all respects, he enjoys the perfection of life.