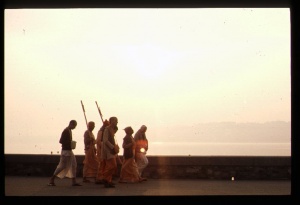 Prabhupāda: There are so many persons following their own principles of religious, ritualistic performances, but . . .

(break) . . . by remaining in the same standard. They are not improving. Spiritual life, or religious life, means that one should make advance towards back to home, back to Godhead, not that religious life should be followed to make some material improvement. That is not religious life.

Dharma-artha-kāma-mokṣa (SB 4.8.41, CC Adi 1.90): these are the principles for elevating a living entity to the highest platform. But they have taken it, generally . . . they perform religious ritualistic performances for getting some more money, artha. Of course, we require some money for our maintenance; that is necessary. But if we simply perform ritualistic performances to acquire money only, that is misguided.

Generally people do so. They give in charity so that they may get more money. They open dharmaśālās so that they can get more houses. That is their purpose. Or they may be elevated to the heavenly kingdom. Because they do not know what is his actual interest. The actual interest is to go back to home, go back to Godhead. This idea, perhaps not even one percent men know that the ultimate end of, ultimate goal of life is to go back to home, back to Godhead.

Na te viduḥ svārtha-gatiṁ hi viṣṇum (SB 7.5.31)—Viṣṇu, God, the Supreme Personality of Godhead. They do not know that the real interest is to go back home, go back to Godhead. Durāśayā ye bahir-artha-māninaḥ. They have accepted that "We shall be happy by adjusting this material world." Therefore they cannot make any progress.

Actually, religion does not mean to improve your material condition. That is not religion. Śrīmad-Bhāgavata therefore says that sa vai puṁsāṁ paro dharmo yato bhaktir adhokṣaje (SB 1.2.6): "That type of religion is first class which elevates one to the platform of pure devotional service to the Absolute Truth." That is religion.

Therefore here it is said, naikāntikam. Naikāntikaṁ tad dhi kṛte 'pi niṣkṛte (SB 6.2.12). Even one becomes free from all contamination of sinful life by prosecuting the particular type of religious principles, that is not sufficient, because ultimately it cannot give any good result.

Because the mind is so disturbing that even after being freed from all contamination of sinful life, the mind again goes to that sinful activity.

It is very difficult to control the mind. Arjuna, when he was advised to perform the haṭha-yoga system to control the mind, he flatly refused that, "I am unable to control my mind in this way." He stated that cañcalaṁ hi manaḥ kṛṣṇa (BG 6.34): "Kṛṣṇa, the mind is so agitating and moving," cañcalaṁ hi manaḥ kṛṣṇa pramāthi, "it is just like a madman." Just like you cannot control a madman. Sometimes you have to chain a madman for doing mischievous activities. Sometimes you have to send to some hospital for special care.

So Arjuna said, cañcalaṁ hi manaḥ kṛṣṇa pramāthi, mad, balavat. And not only mad, "is very strong," and dṛḍham, and "very strong and determined." Tasyāhaṁ nigrahaṁ manye: "If You ask me to control my mind, it is very difficult for me." Tasyāhaṁ nigrahaṁ manye vāyor api suduṣkaram: "If there is some wind, strong wind, and if one thinks that 'I shall control this wind, stop this strong blowing of wind,' as it is impossible, similarly, the movement of my mind is so strong that I cannot promise that I can control this mind."

And after the statement of Arjuna, Kṛṣṇa said . . . Kṛṣṇa saw that His friend was becoming disappointed. Because he cannot prosecute the yogic system, so he's becoming disappointed. But He knew that Arjuna was always thinking of Kṛṣṇa. That . . . that was certain. Although his mind was very agitated because he was politician, he was warrior, still, his mind was fixed up in Kṛṣṇa. That He knew. Therefore He said that yoginām api sarveṣāṁ mad-gatenāntar-ātmanā (BG 6.47).

The Kṛṣṇa consciousness movement, the technique is that you may be engaged in various types of work, but the mind must be always fixed up in Kṛṣṇa. That art you have to learn. How it is possible? It is possible. Perhaps you have not seen—in India the women, they go to draw water from the well, and they keep on the head. They are going, but the head is so balanced that the waterpot will never fall down. There are many instances that if you learn how to keep the balance, in spite of your movement, the waterpot on the head will not fall.

Similarly, if you mold your life in such a way that Kṛṣṇa should always be remembered, then, in spite of your mind being very agitated, your mind will be fixed up in Kṛṣṇa. That is required. Therefore in the devotional service we have got so many engagements.

That is the art of Kṛṣṇa consciousness. In spite of your all engagement, your mind should be fixed up in Kṛṣṇa.

Because mind is inclined, inclined to go astray. Asat-pathe. Asat means this material, and pathe means way. Mind is generally attracted to this asat-pathe, but you have to draw the mind to the sat-pathe. Sat means spiritual, eternal. That is the practice.

Therefore, tat karma-nirhāram abhīpsatām. Karma. Because if you are engaged in ordinary karma . . . karma I have already explained. Karma means doing something for your personal benefit. That is called karma. Or, in plain words, doing something for sense gratification, that is called karma. And as soon as you engage your activities for such sense gratification or for your personal benefit, then you have to commit sins. That's a fact. Therefore we are entangled in this birth and death problem.

This process is recommended here, citta-śodhaka. If you sit down and write some article on Kṛṣṇa, that means you have to concentrate on Kṛṣṇa's activities or Kṛṣṇa's devotees' activities, and that very process will purify your heart. Therefore we always recommend to our students that you write articles, read our magazine, read our book. In this way if we keep ourself . . . work for Kṛṣṇa. This . . . we have come here in this paṇḍal, or in this Kumbha-melā, not for any other purpose than to glorify the Supreme Lord so that people may understand the importance of this movement.

So citta-śodhaka, here recommended by the Viṣṇudūta. Viṣṇudūta means the direct associates of Lord Viṣṇu. Tat karma-nirhāram abhīpsatāṁ harer guṇānuvādaḥ khalu sattva-bhāvanaḥ. Be always engaged in glorifying the transcendental qualities of Hare. Again it is said hareḥ, not any other person, Hare, Viṣṇu, the Supreme Personality of Godhead.

Now, the Viṣṇudūta concludes that, "This Ajāmila, we know that throughout his whole life he has simply committed sinful activities. That's a fact. We know. But at the time of his death," mriyamāṇaḥ, yad asau bhagavan-nāma samagrahīt, "simply chanted the name of Hari, Nārāyaṇa," samagrahīt, "perfectly, without any offense." Just try to understand that simply by chanting one name only, Nārāyaṇa, samagrahīt, without any offense, he became immediately purified from all sinful activities.

These are not exaggeration. This is the fact. Otherwise, why Caitanya Mahāprabhu should encourage:

You'll never find any disagreement with the śāstra, sādhu and guru. Therefore Narottama dāsa Ṭhākura says, sādhu-śāstra-guru-vākya. That is our guidance. Sādhu. If you say Caitanya Mahāprabhu was a sādhu or a devotee, so His words and the words of the scriptures are the same. The sādhu will speak only on the authorities of śāstra. And śāstra means the description given by the sādhu. They are correlative. And guru means who follows the sādhu and the śāstra.

So these are very instructive. Sādhu who is always engaged in the service of the Lord, he is sādhu, bhakta. And śāstra. Śāstra means description of the activities of the sādhu and Bhagavān. Just like Śrīmad-Bhāgavatam. We are reading the story of Ajāmila. He became a sādhu, therefore his description of his life is inserted here. Prahlāda Mahārāja a sādhu; Dhruva Mahārāja, a sādhu; Ambarīṣa Mahārāja, a sādhu.

So if there is one sādhu, he can make many other sādhus. Sādhu. Sādhu does not mean that he is alone enjoying the fruits of his spiritual life. Sādhu means who is trying to make others sādhu. He is sādhu. Kṛṣṇa likes such sādhu, as He has described in the last portion of Bhagavad-gītā: na ca tasmān manuṣyeṣu kaścin me priya-kṛttamaḥ (BG 18.69).

Therefore Narottama dāsa Ṭhākura says that sādhu, śāstra, these things should be confirmed by the spiritual master, and if we follow these principles, sādhu-śāstra-guru-vākya, cittete kariyā aikya . . . we should confirm one thing by the other, the other by another. In this way we have to make our conclusion.

So, yad asau bhagavan-nāma mriyamāṇaḥ samagrahīt. Because the Yamadūta here, yes, Viṣṇudūta says that, "We know that this person was addicted to sinful activities throughout his whole life, but at the time of his death he has remembered. He has uttered offenselessly once the name of Nārāyaṇa." But one should not think that, "All right. Let us go on committing all sinful activities, and at the time of my death I shall think of Nārāyaṇa or Kṛṣṇa." That is not possible.

That is explained in the Bhagavad-gītā. If you practice when you are alive, when you are strong, for chanting the holy name of Kṛṣṇa or Nārāyaṇa, then there may be chance. Otherwise it is not possible. Not that a layman will all of a sudden will chant "Nārāyaṇa." He must have previous practice. Therefore Caitanya Mahāprabhu has recommended, kīrtanīyaḥ sadā hariḥ (CC Adi 17.31). Amāninā mānadena kīrtanīyaḥ sadā hariḥ. Sadā tad-bhāva-bhāvitaḥ. In the Bhagavad-gītā Śrī Kṛṣṇa says, sadā tad-bhāva-bhāvitaḥ (BG 8.6). If you practice in your life chanting the holy name of Kṛṣṇa . . .

So the chanting of Hare Kṛṣṇa mantra, Caitanya Mahāprabhu has said, sadā, kīrtanīyaḥ sadā hariḥ: not that two hours or one hour, but one should practice. And that is the recommendation as it was followed by Haridāsa Ṭhākura. But because we cannot do that, therefore we have to engage always in the service of Kṛṣṇa. That will make me remembering Kṛṣṇa. The real fact is how to remember Kṛṣṇa.

So this remembering of Kṛṣṇa by Ajāmila was not accidental. He chanted. He served Nārāyaṇa in his previous life when he was young man, but by bad association he fell down. But the effect was there at the time of his death, so much effective that the Viṣṇudūta recommends that "Because he has chanted at the time of his death the holy name of Lord, he is now free from all sinful reaction." Now:

There is another Bengali verse, eka hari-nāme, yata pāpa hare, pāpī haya tata pāpa, karibāre nahe: "Once chanted Hare Kṛṣṇa, or Kṛṣṇa's name, it has so potency, so much potencies that it can vanquish millions and millions of sinful reaction that so much a sinful man cannot commit."

A sinful man can commit hundreds of thousands of sinful activities, but the holy name of Kṛṣṇa is so powerful that a sinful man will be unable to commit so many sins as the name can vanquish simply by chanting once offenselessly. This is the conclusion.

Somehow or other if we can chant Hare Kṛṣṇa mantra, then we can save ourselves from so many troubles, as it is example. This verse we shall explain tomorrow again.