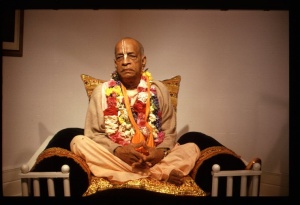 The twelve mahājanas, authorities, we have discussed yesterday morning.

The Vedic injunction is, in order to understand, one must approach a bona fide spiritual master, durbodham. Guhyaṁ viśuddham. Why durbodham? Why it is very difficult to understand? Because it is transcendental, viśuddham, beyond the range of this material atmosphere. Our knowledge is . . .

We get knowledge after creation of this body; therefore all knowledge is material. We tax our brain, which is a material production only. So there is no possibility of understanding religion or God by taxing the material membrane . . . what is called?

Prabhupāda: Yes. That is not possible. But those who are grossly materialistic, those who do not know that beyond this materialistic body there is the soul, they cannot understand, for them, this yogic principle is recommended, to exercise this body. As if by exercising the body he will understand God and understand religion.

Therefore the yoga system is not recommended for the first-class men. First-class men, they know that by gymnastic process of exercising the material senses, one can(not) understand God or religion. Viśuddham. It is beyond.

Therefore another name of Kṛṣṇa, or God, is Adhokṣaja. Adhaḥ. Adhaḥ means falls down, and akṣaja, akṣaja means . . . akṣa means direct experience, direct seeing, direct touching. And ja means born. Knowledge born of direct perception of the senses—this is called akṣaja. And adhaḥ means where akṣaja, the direct perception of material senses, is cut down. There is no possibility. He is called adhokṣaja. Therefore, Kṛṣṇa's another name is Adhokṣaja: "beyond the sense perception knowledge."

So an airplane running on, on that speed, and thinking for millions of years, still, you cannot approach the abode of Kṛṣṇa or understand Kṛṣṇa. Only you can understand by His mercy. Only by the mercy of . . . bhaktyā mām abhijānāti. Bhaktyā mām abhijānāti (BG 18.55). Just like Kṛṣṇa is voluntarily offering Arjuna to understand Bhagavad-gītā. He's not going to canvass anyone. "Arjuna, you understand it. You'll be able to understand, because you are My devotee."

So for a devotee only, the door of God is open. For others, there is no possibility. Therefore He's called durbodham. Durbodhaṁ yaṁ jñātvā. But somehow or other, if he can understand the principles of religion and God, then immediately he becomes immortal. Immortal means he's no more going to accept any material body. That is also stated in the Bhagavad-gītā:

Anyone who can understand in truth, not ephemerally, substantially if one understands what is Kṛṣṇa, how He appears, what are His activities, what is our relation—these things, when one understands, immediately he becomes liberated. Tyaktvā dehaṁ punar janma. Such person, giving up this body, no more comes into this material world. The same thing is herein, that jñātvā. If one can understand what is religion and what is Kṛṣṇa, only by this understanding, jñātvā amṛtam aśnute. Amṛtam. Mṛtam means death. A means "none," "not," negation. So amṛtam aśnute: he drinks nectarine. The word nectarine, sudhā.

So dharma, this religion, so although it is very difficult to understand, still, by the grace of Kṛṣṇa, it has been made very simple and easy. Unfortunately, people have no faith. They do not believe. They think something cumbrous, something speculative, something very difficult is the process of executing religion. No.

Yamarāja says that etāvān eva loke 'smin puṁsāṁ dharmaḥ paraḥ smṛtaḥ: "The highest principle of religion is this." What is that? Bhakti-yogaḥ bhagavati. Bhakti-yoga. One may . . . just like some people, some foolish say, "Bhakti-yoga . . . I have got very much devotion to Goddess Kālī, to Goddess Durgā," or so many demigods. "This is also bhakti." No. Bhakti-yoga means bhagavati.

Love means love of Godhead. Otherwise, there is no love—only lust. Similarly, bhakti means, when this word used, bhakti-yoga, that is only in relationship with the bhakta, or devotee, and Bhagavān. That is called bhakti-yoga. Nāma, harer nāma, not that any name. Harer nāma harer nāma (CC Adi 17.21). Any name can be applied to Kṛṣṇa indirectly, but directly . . . we are concerned directly.

Ānukūlyena kṛṣṇānuśīlanam (CC Madhya 19.167). We have to cultivate Kṛṣṇa not indirectly. Indirectly, everything is worshiping Kṛṣṇa, because there is nothing but Kṛṣṇa everywhere. Just like Kaṁsa. Kaṁsa, he was thinking of Kṛṣṇa indirectly, as enemy. Therefore, that is not bhakti. Bhakti means Kṛṣṇa consciousness favorably, directly.

Bhaktivinoda Ṭhākura says, nāmāśraya kari thākaha āpana kāje. So this, our process, first of all, we give the chanting process, sixteen rounds. That whole process of bhakti-yoga begins from that point. And the more you become experienced and more you relish the chanting, the more you become advanced. Other things will automatically come and make you perfect. Tan-nāma.

Therefore we should be very much, I mean to say, strict in the principle of following the regulative principles and avoiding offenses and chant the mantra faithfully. That is the beginning of religion, and that is the beginning of liberation. And Caitanya Mahāprabhu blesses that ihā haite sarva-siddhi haibe tomāra: If you chant the holy name of Kṛṣṇa in faith and according to rules and regulations . . .

Even rules and regulation fails, but chanting may not be stopped. Even sometimes we fail. There is possibility of failing, because we are conditioned, and there is every chance of falling down. So despite you are fallen down, still, you should go on chanting.

This verse, Nārada Muni's instruction, we were discussing the last meeting.

One has taken to this Kṛṣṇa consciousness cult and is chanting as far as possible, but there is possibility, because one is not mature, there are so many attraction of māyā, he may fall down. But Nārada Muni says: "Still, he is not in loss." It is so powerful. "Still he is in gain. And one who does not take to Kṛṣṇa consciousness, if he is following the principles of . . . religious principles—everyone has got some religion—still, what does he gain? He does not gain anything." That is the verdict of Nārada Muni.

So the evidence is that Ajāmila, simply by his chanting "Nārāyaṇa," he became saved from imminent danger, being arrested by the Yamadūtas, or death.

This is the conclusion that:

It is clearly stated here that bhagavato guṇa-karma-nāmnām. Nāma means name, and guṇa means quality and karma means activities. That is not ordinary karma. Just like when we read Kṛṣṇa book, Kṛṣṇa is killing so many demons, He is kidnapping somebody, He is . . . so many things. It appears just like ordinary, I mean to say, malpractices in the material world. It appears like that.

"So what is this God? He is killing so many persons, He is kidnapping some woman. What is this God?" they may say. But they do not know that that is also transcendental. That is as pure as chanting Hare Kṛṣṇa mantra. It is as pure as. Otherwise, what interest we have got to read Bhagavad-gītā? It is in the battlefield. Senayor ubhayor madhye (BG 1.21). Combination of two parties, soldiers, and they are fighting, they are killing.

Therefore those who are sahajiyās, they simply go to the pastimes of Lord Kṛṣṇa with the gopīs. Other things, "Oh, no, no. That is not Kṛṣṇa's pastime. That is not Kṛṣṇa's pastime." That is, they differentiate the absolute activities of the Absolute. That is called sahajiyā. The sahajiyās will never read Bhagavad-gītā, will never read. Because they have been elevated to the mellows of conjugal love.

So out of curiosity they came. And when they saw that he was discussing Upaniṣad, gradually they stopped coming. So my Guru Mahārāja recommended that, "These people are not living in Rādhā-kuṇḍa. They are living in Naraka-kuṇḍa." I have heard it personally.

So those persons distinguish. Just like Bhīṣma. Bhīṣma is stated here as one of the authority, mahājana. But what did he do? He fought against Kṛṣṇa and pierced with his arrows. You know, in the . . . we have stated in the Śrīmad-Bhāgavatam. Kṛṣṇa became so much disturbed that . . . not disturbed, that is also another . . . He's pleased. He became pleased, rather. Being pierced by the arrows of Bhīṣma, He became pleased. That I have described in my translation.

So being pleased, He came before him. He came before him as if angry, but not . . . He was so pleased that, "You wanted to break My promise. I have broken it! Please save Arjuna, that is My request to you.' " He promised that, "Now tomorrow I shall fight in such a way that either Kṛṣṇa has to break His promise, either . . . or His most intimate friend, beloved friend, Arjuna, will be killed."

Therefore, we have to follow only the instruction of mahājana; otherwise, we'll be bewildered. Vaiṣṇave kriyā mudrā vijñeha nā bujhaya (CC Madhya 23.39). We cannot understand what are the activities of Kṛṣṇa and His devotees. We have to simply follow their instruction. That's all. The sahajiyās, they do not follow the instruction. They imitate only, "Kṛṣṇa has made rāsa-līlā; so why not we also make rāsa-līlā?" It is going on, regularly.

So etāvatālam agha-nirharaṇāya puṁsāṁ saṅkīrtanam (SB 6.3.24). If you actually want to become free from the contamination of this material world, then you should always be engaged in chanting, saṅkīrtanam. Not only the holy name, but reading the Kṛṣṇa book, The Nectar of Devotion, Teachings of Lord Caitanya.

Kīrtanīyaḥ sadā hariḥ (CC Adi 17.31). Caitanya Mahāprabhu says sadā. Sadā means always. So we have got materials for engaging ourself always in Kṛṣṇa consciousness. Not that we have got only this one item. No. We have got so many items. That is also accepted.

In whatever activities you are engaged . . . my Guru Mahārāja condemns the . . .

He says that in a corner, in a secluded place, you are chanting is a cheating process for cheap adoration. Why? Because he knows that those who are neophytes, if they imitate the chanting, they simply waste their time. Therefore, he should be engaged in other activities, because he has got the power at the present moment, karma.

Karma means activities. This whole world is full of activities. Therefore this karma should be changed into bhakti, in devotional service. He . . . one must be engaged in that . . . it appears like karma, but it is not karma, it is bhakti. Here also . . . just like Kṛṣṇa is doing something. That is not karma, that is transcendental. Similarly, a devotee in Kṛṣṇa consciousness, for service of Kṛṣṇa, if he is engaged which looks superficially as karma, that is not karma; that is bhakti.

The sahajiyās, they do not know it. They think that, "We shall sit in a secluded place and chant, imitating Haridāsa." We have seen it. Their imitation is useless. They fall down. Therefore they must be always engaged in some activities. Otherwise, he'll be attracted by the modes of ignorance and passion.

Etāvatālam agha-nirharaṇāya. Agha means the reaction of sinful activities. Every one of us, anyone who is in this material world, he is sinful. Without being sinful, nobody is here in this material world. If he's not sinful, then he'll be immediately transferred. Yeṣām anta-gataṁ pāpaṁ janānāṁ puṇya-karmaṇām (BG 7.28). Immediately transferred to the spiritual world. He has . . .

Just like a person who has finished his criminal punishment, immediately he is released from the prison. Similarly, a person who is freed from the resultant action of sinful activities, he immediately becomes liberated. Therefore anyone who is in this material world engaged in fruitive activities . . . not the devotees. That is another mistake. The devotees are also here, but they are always in Vaikuṇṭha. Brahma-bhūyāya kalpate (BG 14.26).

So anyway, the general process is that instead of, I mean to say, following the religious rituals for diminishing or getting out of the sinful reaction, one is recommended to accept bhakti-yoga, beginning with the chanting of the holy name of Kṛṣṇa. That is the conclusion.