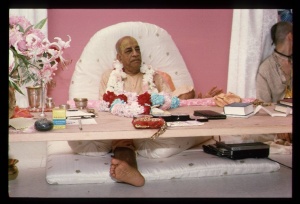 Prabhupāda: . . . how to make progress in bhakti-yoga, or bīja-nirharaṇam. I have explained several times bīja-nirharaṇam (SB 7.7.28). There is bīja, the propensity for lording it over the material nature, resources, that is the bīja of materialistic life—how to become a very great personality within this material world. The bhakti-yoga is just the opposite. Here everyone is trying to become greater than the other.

More . . . just like the same example: the more you increase your temperature, you are facing death. Certain temperature is required, 98 degree. But if you simply increase your temperature, "Oh, it is very nice," then at 107 degree you finish. So this material improvement means meeting death. Let us come to the point. The nationalism is competition which nation is greater. Now they have manufactured atomic bomb. That means finishing point they have come to.

In the material . . . spiritual world, if somebody is greater in service, other, they appreciate, "How great he is, how he has advanced in Kṛṣṇa's service. We could not do it," the Rādhārāṇī's spirit. Why Rādhārāṇī is worshiped by the devotees? His (Her) spirit is like that. If anyone, She finds a nice devotee of Kṛṣṇa, She immediately recommends to Kṛṣṇa, "How nice this devotee. He can render better service than Me. Please accept him."

The most dear, most beloved by Kṛṣṇa, is Rādhārāṇī, and She is so humble. As soon as a humble devotee approaches Rādhārāṇī by glorifying Kṛṣṇa, immediately She accepts, "Oh, how great he is. He is doing greater service than Me." That is mahā-bhāgavata's darśana. Mahā-bhāgavata sees that everyone is engaged in service; therefore he has no discrimination. But don't imitate like that.

So bīja-nirharaṇam, the bīja, you should always understand. Material bīja means the propensity to rule over this material world better or greater than others. That is materialism. And therefore, Kṛṣṇa's first condition is that, "You give up all this nonsense. Please surrender unto Me." There begin . . . (indistinct) . . . and Prahlāda Mahārāja said, bīja-nirharaṇam, bhakti-yoga. The more one advances in bhakti-yoga, he is become humbler, because he has nothing to do with this material world.

So the beginning is guru-śuśrūṣayā, we have explained, by service to the spiritual master with love, bhaktyā, not officially. Officially doing something and internally doing something, that will not be successful. Actually, with brain and with love and affection, service.

This Hare Kṛṣṇa, Hare Kṛṣṇa, Kṛṣṇa Kṛṣṇa, Hare Hare/ Hare Rāma, Hare Rāma, Rāma Rāma . . . as soon as we hear this sound, immediately we remember the form of Kṛṣṇa. Immediately we concentrate on the lotus feet of Kṛṣṇa. This chanting is perfect. But I am chanting and I am thinking of and planning something else, that is aparādha. But that does not mean we shall stop. But we should try, abhyāsa-yoga, we should try to make it our habit, by chanting the Hare Kṛṣṇa mantra, we should immediately remember the form, quality, pastimes of Kṛṣṇa.

Tat-pādāmburuha-dhyānāt. The lotus feet of Kṛṣṇa, dhyānāt, that is meditation. Tat-pādāmburuha-dhyānāt tal-liṅgekṣārhaṇādibhiḥ. To come to the temple . . . deity worship is meant for that purpose, just to see the form of Kṛṣṇa so that we may remember. Always, twenty-four hours, we can see. It is not idol worship.

The rascal atheists, they can say like that, but our process is this. Guru-sevā, offering all respect to guru, and always thinking of Kṛṣṇa's lotus feet, seeing His forms in the temple, worshiping Him as they are described, as they are prescribed in the śāstras, this is the process. Tal-liṅgekṣārhaṇādibhiḥ. Tasya liṅgānām mūrtinām īkṣaṇa, īkṣaṇam ca arhaṇam ca ādi yeṣām bandhanādinam tasya.

Mūrtinam īkṣaṇa. Īkṣaṇa means seeing. Therefore, the Deities should be very nicely decorated; the temple should be very much cleansed, all-attractive. People may come and immediately become attracted with the Deity, īkṣaṇam, with devotion. That is the system of temple worship. Unclean temple worship or no decoration, no flower, this is useless. If you want to introduce temple worship, that should be properly done so that any man who comes immediately become attracted with the form, īkṣaṇam.

Another thing is harīḥ sarveṣu bhūteṣu bhagavān ananta īśvaraḥ. So we should practice to see every man as the temple, every man, every living entity, because Bhagavān, the Supreme Personality of Godhead as Antaryāmī, or Paramātmā, is residing with every living entity. So in higher status, a devotee sees everybody as temple of God, because the God is there. So this should be also practiced. As we respect a temple or a church, similarly, we should give respect to all living entities.

Harīḥ sarveṣu bhūteṣu bhagavān ananta īśvaraḥ. Bhagavān ananta. If some foolish person says how God can be in every . . . within everybody? No, He is ananta, He is unlimited. He can be. That is His omnipotency.

Evaṁ nirjita-ṣaḍ-vargaiḥ kriyate bhaktir īśvare (SB 7.7.33). This practice will gradually enhance your devotion, at the same time your strong senses eager to enjoy this material world will be cut down. That is called breaking the poison teeth of the serpents, sense serpents. Durdāntendriya-kāla-sarpa-paṭalī protkhāta-daṁṣṭrāyate (Caitanya-candrāmṛta 5). For a devotee, there is no danger from the senses, because his senses are engaged in the service of the Lord. So he is the greatest yogī.

Sense you cannot extinguish. The living entity, you must have your senses. Living means you have got your senses. But they should be purified. They are now engaged in the service of māyā, and now, by bhakti-yoga process you have to purify and engage the senses in the service of the Lord—the eyes and hands, the legs, the tongue, the ear, all the senses. The eyes, instead of seeing very beautiful woman, see Kṛṣṇa, Rādhārāṇī. That sense perception is there, but it is spiritualized. The tongue wants go to restaurant and eat meat and drink wine, but engage the tongue in eating prasādam, that is control. That's all.

So controlling, not that stop, lock up the tongue. Everything, every sense. Sex life. All right, if you can beget child to take care to raise him a Kṛṣṇa conscious, all right, have children. This is our sense control. Not artificially stopping them. No question of stopping. But utilize it for Kṛṣṇa's service. That is bhakti. That is bīja-nirharaṇam. You will never like to control over. Being controlled by the Supreme Lord, you will feel so much satisfaction that you will never like to control over—that is materialism.

In this way, when he is fully engaged in the service of Vāsudeva, Kṛṣṇa, at that time he is fully satisfied—he is no more disturbed.

In this way, as he makes advance in spiritual life, then simply by niśamya karmāṇi guṇān atulyān, simply by hearing about Kṛṣṇa's pastimes, immediately he will be filled up in ecstasy and he will cry. These are the symptoms.

Niśamya karmāṇi guṇān atulyān, vīryāṇi līlā-tanubhiḥ kṛtāni. Vīryān līlā, "Oh, Kṛṣṇa is killing so many demons, Kṛṣṇa is dancing with gopīs, Kṛṣṇa is playing with His cowherd boys, Kṛṣṇa is going there," this is līlā, smaraṇam. The Kṛṣṇa Book reading means remembering all these activities of Kṛṣṇa. Simply go on reading Kṛṣṇa Book repeatedly, you are in the perfect stage of transcendental position. Simply read our Nectar of Devotion. Līlā, atulyān.