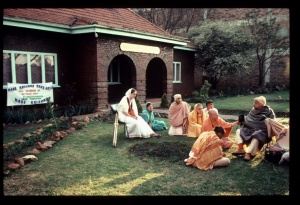 The six Gosvāmīs, who lived at Vṛndāvana, they came from different parts of the country. Rūpa Gosvāmī and Sanātana Gosvāmī belonged to formerly South Kanada, and they established . . . their forefathers established themselves in Bengal. So Gopāla Bhaṭṭa Gosvāmī was South Indian. Similarly, Śrī Jīva Gosvāmī belonged to Bengal. Śrī Caitanya Mahāprabhu picked up very great personalities from all parts of the country. Vande rūpa-sanātanau raghu-yagau śrī-jīva-gopālakau. So how they . . .

(break) . . . (indistinct) . . . the next ācārya from Śrī Jīva Gosvāmī. So their process of executing this Kṛṣṇa consciousness movement was, kṛṣṇotkīrtana-gāna-nartana-parau. They were always engaged in chanting the Hare Kṛṣṇa mantra, kṛṣṇotkīrtana, utkīrtana—very loudly. Hare Kṛṣṇa, Hare Kṛṣṇa, Kṛṣṇa Kṛṣṇa, Hare Hare, just like these boys are chanting and dancing.

Kṛṣṇotkīrtana-gāna-nartana-parau premāmṛtāmbho-nidhī, they are merged in ocean of transcendental bliss. Dhīrādhīra-jana-priyau, the Gosvāmīs were dear to all classes of men. There are two classes of men, one class is dhīra, dhīra means one who has satiated his material desires he is called dhīra. He has no more any anxiety for sense gratification he is called dhīra, and the other class is called adhīra they are busy for sense gratification.

So this kṛṣṇotkīrtana the chanting and dancing, is dear very pleasing both to the dhīras and the adhīras, therefore the Gosvāmīs were dear to all classes of men. They were living in Vṛndāvana, not that they were liked by the devotees only but even ordinary men. They also worshipped these Gosvāmīs even in their family quarrel between husband and wife they would refer the case to the Gosvāmīs. They were so dear to the general public that they would submit the family quarrel and whatever the Gosvāmīs would decide they will accept it.

So dhīrādhīra-jana-priyau, priya-karau because this movement is so pleasing that anywhere it can be attractive that we are feeling practically . . .

(disturbance in the audience) This is not pleasing to the children . . . (laughter) That's all right. So wherever we are doing in the remotest part of Africa where practically they have not seen what is civilised life. There also we find that when you chant this Hare Kṛṣṇa mantra all the boys, all the males and females in the village they come out and join with this chanting and dancing. Dhīrādhīra-jana-priyau priya-karau, it is so pleasing.

The Africans are asking Indians there that why did you not bring this movement, so long? Because there are many Indians in Africa, you know, many Gujaratis are there. So now there are asking why this movement was not imported so long and the African government also is very pleased upon us. We had also that saṅkīrtana festival for seven days many government officer came and they gave us permit that we welcome any nice movement in this country. So they welcomed our movement we have no hindrances from the government or from the public it is going on nicely.

So dhīrādhīra-jana-priyau, it is pleasing to all classes of men nevermind whether he is dhīra or adhīra. Śrī-caitanya-mahāprabhu-kṛpā-bharau bhārāvahantārakau, this is possible only when one receives the blessings of Lord Caitanya Mahāprabhu. Śrī-caitanya-kṛpā-bharau, this Rūpa Gosvāmī received blessings directly from Lord Caitanya continually for 10 days in Daśāśvamedha-ghāṭa at Prayāga Allahabad. Similarly Śrī Sanātana Gosvāmī was instructed continually for two months in Vārāṇasī. In this way these Gosvāmīs, vande rūpa-sanātanau raghu-yugau śrī-jīva-gopālakau. They were directly disciples of Lord Caitanya and empowered to preach this cult of Kṛṣṇa consciousness all over the world. Śrī Caitanya Mahāprabhu asked not only the Gosvāmīs he asked all the Indian people through the Gosvāmīs he says:

In South India just now I was speaking in the ladies meeting—you have got the directions of the great ācāryas. Especially Vaiṣṇava ācāryas, Rāmānujācārya, Madhvācārya. So our request is that you South Indian people you should take, Caitanya Mahāprabhu also very extensively travelled all over South India and you were blessed and still you are blessed. You take this opportunity of Kṛṣṇa consciousness movement take it seriously, it is not very difficult. What we are doing here it can be introduced in every home, in every home.

You can worshipped Lord Caitanya and Lord Śrī Kṛṣṇa just like here you see in this temple they are worshipping Lord Caitanya along with Rādhā and Kṛṣṇa. So you can also keep in your home a picture of Lord Caitanya a picture of Rādhā-Kṛṣṇa and you are cooking, you cook it very nicely, very cleansly, for God. Patraṁ puṣpaṁ phalaṁ toyaṁ (BG 9.26), Kṛṣṇa is very pleased to accept all kinds of vegetable preparations if you offer Him with devotion, tad ahaṁ bhakty-upahṛtam aśnāmi prayatātmanaḥ. If you offer anything from this group, patraṁ puṣpaṁ phalaṁ toyaṁ yo me bhaktyā prayacchati.

The real thing is bhakti. Kṛṣṇa the Supreme Personality of Godhead is not in want of food He is fully satisfied He is ātmārāma, He is satisfied with Himself He hasn’t got to take any outside help for His satisfaction. But still He is so kind He says that any person with love and devotion if he offers Me, patraṁ puṣpaṁ phalaṁ toyaṁ, I accept—I eat. Kṛṣṇa is so kind He does not . . . nobody requires . . . very gorgeously to offer Kṛṣṇa, Kṛṣṇa wants only bhakti, yo me bhaktyā prayacchati. Kṛṣṇa is not interested in karma, jñāna. He is interested in bhakti therefore His name is bhakti-vatsala, you know. You will never find Kṛṣṇa's name as jñāna-vatsala or karma-vatsala His name is bhakti-vatsala, perhaps you know it.

So Kṛṣṇa also says, bhaktyā mām abhijānāti (BG 18.55) and if you want to know Kṛṣṇa you cannot know Him by gymnastics of work, no. Kṛṣṇa can be known simply by bhakti, bhakti means loving spirit, serving spirit, everyone should always be anxious to serve Kṛṣṇa or His representative, sevonmukhe hi jihvādau (CC Madhya 17.136). Simply by serving you can see Kṛṣṇa eye to eye, you can speak with Kṛṣṇa face-to-face that is possible, there are many instances.

Uttama-adhikārī bhakta means who has developed his Kṛṣṇa consciousness to the topmost level, kṛṣṇa-prema. This kṛṣṇa-prema can be achieved by everyone provided he tries to make himself attached to Kṛṣṇa these things are instructed by Kṛṣṇa himself in the seventh chapter of Bhagavad-gītā:

You have to increase your attachment for Kṛṣṇa that attachment can be increased also by process:

So this is the second stage of Kṛṣṇa consciousness sādhu-saṅga, the third stage is after sādhu-saṅga—to become anxious to be initiated. The initiated process when accepted then there will be anartha-nivṛttiḥ, just like these boys American and European, after initiation their all anarthas, unwanted things they have given up. What are those unwanted things? Illicit sex life, gambling, intoxication and meat-eating, they have given up.

This is called anartha-nivṛttiḥ when there is anartha-nivṛttiḥ then there is niṣṭhā, firm faith beginning with the faith. Then after anartha-nivṛttiḥ then one becomes firmly faithful to Kṛṣṇa. Tato niṣṭhā tato ruci, they have no other taste for anything material except Kṛṣṇa consciousness. They are no more interested in going to the cinema or any public political meeting or newspaper. They are useless for a person who is trying to advance his Kṛṣṇa consciousness. These material things are useless, bhaktiḥ pareśānubhavo viraktir anyatra syāt (SB 11.2.42), this is the taste of bhakti.

As you advance in bhāgavata-bhakti you become distasteful to all these nonsense, bhaktiḥ pareśānubhavo viraktir anyatra. Tato niṣṭhā tato ruci athāsakti, then attachment, these attachments are the firm footage of Kṛṣṇa consciousness. Athāsaktis tato bhāvas, the next step and the last stages is prema, sādhakānām ayaṁ premṇaḥ prādurbhāve bhavet kramaḥ. These are the different steps for raising oneself to the platform of love of Godhead and that is the highest perfection of life.

If you actually want perfectness of mind, peacefulness of yourself then take to this Kṛṣṇa consciousness and be happy. Thank you very much. Hare Kṛṣṇa. (end)