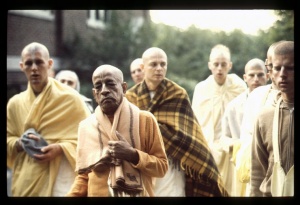 Ladies and gentlemen, I thank you very much for you coming here and participating in this great movement known as Hare Kṛṣṇa saṅkīrtana movement. This saṅkīrtana movement was started five hundred years ago by Lord Caitanya Mahāprabhu in India, in the state West Bengal, in the district of Nadia. His mission was that this Hare Kṛṣṇa movement, or God consciousness, should be spread all over the world. As many town and villages as there are on the surface of the globe, this Hare Kṛṣṇa movement would be spread all over. His prediction is now being carried out by some of the devotees, and you may kindly take advantage of this movement.

What is that misunderstanding? The misunderstanding is that we are accepting this material body as the self. We are all living entities, spirit souls, encaged in this material body. We are transmigrating from one body to another. There are 8,400,000 species of life, and this human form of life is the greatest opportunity for self-realization. Self-realization means to know that "I am not this body. I am spirit soul. I am part and parcel of God."

You have . . . most of you must have read Bhagavad-gītā. In the Fifteenth Chapter it is said that the living entities are part and parcel of God. God is by nature joyful. In the Vedānta-sūtra it is said about the Supreme Absolute Truth as ānandamayo 'bhyāsāt (Vedānta-sūtra 1.1.12): by nature joyful. Therefore, as we are part and parcel of God, our aim of life is joy. We are searching after that joyfulness within this material world, but that is not possible. Just like a fish, if it is taken from the water and put on the land, in any condition the fish will never feel joyfulness.

In the material covering, the senses are not properly being used. The enjoyment which you are now having, it is simply a perverted reflection of our spiritual self. So this Kṛṣṇa consciousness movement is meant for purifying our senses. In the Vedic literatures it is said, sarvopādhi-vinirmuktaṁ tat-paratvena nirmalam (CC Madhya 19.170). When we become free from the designation, at that time we become spiritually purified.

At the present moment, on account of our ignorance, or in ignorance of our self-realization, we are thinking in relationship with this body. I am born in India, so I am thinking, "I am Indian." You are born in England, therefore you are thinking "Englishman." Or other is thinking some other thing. But actually, we are neither Indian, nor Englishman, nor Japanese, or nor German. We are spirit soul, part and parcel of God. Therefore, that is self-realization. Unless we realize our self, all activities that we are enacting, this is meant for our defeat.

Therefore, practically we see that in spite of advancement of education, in spite of economic development, in spite of so many philosophical speculations, we are in the same problematic atmosphere. That is the defect of the present civilization, because they do not know what we are. We are spirit soul. So we must realize. That is . . . if we want to realize, everything explained in the Vedic literature, which is summarized in the Vedānta-sūtra and later on in the Śrīmad-Bhāgavatam. And five thousand years, the Lord Himself, Lord Kṛṣṇa, spoke the philosophy or the knowledge in this Bhagavad-gītā.

We are publishing all these literatures translated into English. If you want to read them, if you want to understand this scientific, spiritual movement through your scientific knowledge, philosophical speculation, we have got dozens of books. You can read them and you can understand them. Otherwise, it is very simple method: you can simply chant this Hare Kṛṣṇa mahā-mantra. It is only sixteen words:

So there is no expenditure. If you chant Hare Kṛṣṇa mantra, there is no loss on your part, neither we are charging anything. We are distributing this mahā-mantra free of charges, and anyone can chant. There is no difficulty. We are spreading this movement all over the world. Not only in your country—whole of America, whole of Canada, Japan, Australia, New Zealand. Everywhere. We have got one hundred branches all over the world. And there is no difficulty. Even in Africa, the Africans are also chanting this Hare Kṛṣṇa mantra.

And we shall periodically remind you by such functions as we are holding today, the Ratha-yātrā festival.

This Ratha-yātrā festival is very old—at least for 5,000 years. Lord Kṛṣṇa along with His elder brother Balabhadra, or Balarāma, and His sister Subhadrā came in a chariot from Dvārakā to Kurukṣetra. We are commemorating this arrival of Lord Kṛṣṇa with His family on this chariot. This function is held in Jagannātha Purī. Mostly you know, in India it is a great festival. And we are introducing this festival in the Western countries along with Hare Kṛṣṇa movement, because the original progenitor of this Hare Kṛṣṇa movement, namely Lord Caitanya, He took very much active part in this Ratha-yātrā festival.

So following His footsteps, we are also introducing this Ratha-yātrā festival in the Western countries. Simultaneously as it is being observed in London, it is being held in San Francisco, Buffalo and . . .

Prabhupāda: Melbourne, Tokyo and many other places. And India also, in Calcutta also. So this festival, taking part in these festivals, means a step forward for our self-realization. Rathe ca vāmanaṁ dṛṣṭvā punar janma na vidyate. Simply by seeing the Lord on the chariot, one makes advancement for stopping the repetition of birth and death.

So I am very glad that you have taken so much trouble to come here. Now you will chant Hare Kṛṣṇa mantra along with the devotees and take part in honoring the prasādam. The prasādam is also one of the program. Our Hare Kṛṣṇa movement is standing on three principal things: chanting, dancing and eating prasādam. It is not very difficult. It is very enjoyable to chant, dance and take prasādam. And if you like, you can hear a little philosophy of this movement.

Or even if you do not understand the philosophy, even you do not read the books, simply if you take part in these three things, chanting, dancing and taking part in eating the prasādam, your life will gradually progress in spiritual advancement of life. And if you continue this, then some day will come, even in this life it may come, that you will understand what is Kṛṣṇa. And as soon as you understand Kṛṣṇa, then after leaving this body you go back to home, back to Godhead, directly. This is stated in the Bhagavad-gītā. Those who have read Bhagavad-gītā, Lord Kṛṣṇa says:

So in this way, if we associate with Kṛṣṇa's name, Kṛṣṇa's pastimes, Kṛṣṇa's qualities, Kṛṣṇa's form, then gradually we transcend this material existence. Janma karma me divyaṁ yo jānāti tattvataḥ. If we simply try to understand about Kṛṣṇa's movement, then the result is, Kṛṣṇa says, tyaktvā dehaṁ. We have to give up this body. But if we give up this body after being elevated into Kṛṣṇa consciousness, then Kṛṣṇa says, tyaktvā dehaṁ punar janma naiti (BG 4.9). Then, after giving up this body, you haven't got to accept another material body. Tyaktvā dehaṁ punar janma naiti.

Then where shall I go? Kṛṣṇa says, mām eti: "He comes to Me." There is planet beyond this material sky. There is another sky. That is also stated in the Bhagavad-gītā: paras tasmāt tu bhavo 'nyo 'vyakto 'vyaktāt sanātanaḥ (BG 8.20). There is another sky, which is eternal. This sky is temporary. Just like your body, my body or anything in this material world, they are temporary. They have got a date of birth, and they grow, they stay, they produce some by-product, then dwindle and then vanishes. That is material nature. But there is another nature, which is called spiritual nature. Even when everything is annihilated, that nature stands.

So that spiritual nature, or spiritual sky, is described in the Vedic literature, in the Upaniṣads, that there is no need of sunshine, there is no need of moonshine, there is no need of electricity. That is another sky. So our only business is to transfer ourself from this sky to that sky, that illuminating sky. That is the Vedic injunction. Tamasi mā jyotir gamaya: "Don't remain in this darkness, in this world of darkness. Come to the world of light." So this movement is very important movement. We are trying to educate people how to transfer one from this world of darkness to the world of light, which is called Goloka Vṛndāvana.

So I am very much thankful to you that you have given me your time. So we have got our books; our devotees are preaching. Take advantage of this opportunity and make your life successful.

Revatīnandana: Hare Kṛṣṇa. Now after a short chanting of this Hare Kṛṣṇa mantra, we will have a beautiful initiation ceremony, where my spiritual master will accept some new disciples. And after that there will be feasting, free feasting for everyone here. So . . . (indistinct) . . . now just a few minutes of chanting Hare Kṛṣṇa, everybody together. As my spiritual master says, there is no cost, there is no loss, and the result is very nice. Everybody try to . . . (indistinct) . . . Hare Kṛṣṇa.

Revatīnandana: Everyone. (repeats) If everyone can clap and chant, very wonderfully. (kīrtana) (break) (end)