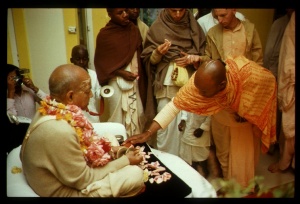 Prabhupāda: No, Lieberman is his original name.

Prabhupāda: Yes. That is very success. (break) . . . that he's dominating?

Satsvarūpa: That's what he wrote in his letter.

Satsvarūpa: He thinks that he's going to win. (break)

Prabhupāda: . . . that these rascal leaders, they cannot give us any comfort. All over the world. Here in Gujarat, the students have insulted the leader, you know? Ah, so horribly. They have dragged the prime minister, chief minister, dragged him and set up and put him seated on a ass's back. In this way he was insulted.

Devotee: This was in Jerusalem?

Prabhupāda: Ah? No, no. Gujarat, here.

Prabhupāda: The next province. (aside) Hare Kṛṣṇa. (break) . . . speaking all the words that he has learned from me. Very good. Very nicely he's presenting.

Prabhupāda: No, no, only twenty-five. (break) . . . they have got the all these culprits, the burglars, the thieves, they should be punished exemplary. (chuckles) Due to his effort. Yes, that should be done. (break) One telegram, "Come immediately Bombay. Everything will be all right. Kṛṣṇa will bless you." (break) I mean to say intelligent in their part, they'll at least give a chance to him. Yes. (break) . . . doing all right.

Satsvarūpa: He said he didn't feel well. He was not going to take the walk.

Prabhupāda: He has come.

Prabhupāda: That he thinks always, not to take walk. But when he takes, that is good. (break) . . . dharma, what is dharma, religion.

Mahāṁśa: I was not there yesterday.

Prabhupāda: Oh, you were not there. So what arrangement is made now?

Mahāṁśa: I got all the bus tickets for the devotees . . .

Mahāṁśa: . . . and for the plane tickets there was a little difficulty. I don't know how many plane tickets are available yet, but I definitely got minimum two. I don't know if I'll be able to get four, but I'm trying. I'm first on the waiting list, so I hope we can get four tickets. (break)

Mahāṁśa: Yes, I told him to send a telegram in any case, but he has not sent. But if the . . . if the program was not nice, then he would have definitely sent some message to cancel the program. (break)

Prabhupāda: . . . get help from them by his bogus program.

Prabhupāda: Vishva Hindu Parishad. What is this nonsense Vishva Hindu . . .? (chuckles) He does not know what is the meaning of Hindu. And his jñāna-yajña. Gītā jñāna yajña. He does not understand even a word of Gītā, and this rascal is preaching Bhagavad-gītā. This is going on. And he has made some name, people after him. People means if you flatter him that, "Whatever you are doing, it is all right."

Prabhupāda: Then they will be very much pleased. And as soon as you criticize that, "You are doing this wrong. You will suffer," "Oh, yes, this Swāmījī is not . . . conservative." That is going on everywhere. In the name of religion you do all nonsense rascaldom, and if the leader approves, "Yes, you can do." Vivekananda did it. Vivekananda did it. "Yes, there is no difference between eating meat and not meating eat in terms of religious system." He preached this, and all the sannyāsīs of Ramakrishna Mission, they eat meat, they drink, they have woman secretary, and everything. This Chinmayananda also like that. I know his whole history. Unless one is purely Kṛṣṇa conscious, one cannot give up all these bad habits. This is the test. Bhaktiḥ pareśānubhavo viraktir anyatra ca (SB 11.2.42). One . . . unless one is substantially advanced in kṛṣṇa-bhakti, they cannot give up this material attachment—illicit sex, meat-eating. They cannot. It is impossible. So even in the name of svāmī and big, big yogīs . . . they are doing all these things. Especially those who go in foreign countries. And in USA illicit sex is very cheap. Everything is very cheap. Yes. Intoxication very cheap, meat-eating very cheap, gambling very cheap. So when they get this cheap amenities, they forget their so-called spiritual life.

Akṣayānanda: One of our friends went and heard Chinmayananda, and he came back to the temple and he said: "Oh, he was speaking very nicely."

Akṣayānanda: "I do not know." (laughs)

Prabhupāda: That is the disease.

Mahāṁśa: They just speak very big words so that the language looks very nice, but people don't understand a word what they are saying.

Prabhupāda: (Prabhupāda talks meaningless words, imitating the rascals) (laughter) They go on speaking like this. And people, "Oh, how amazing!" You simply give some grammatical form and talk all nonsense, people will appreciate it. Jugglery. This is called jugglery. The Māyāvādī paṇḍitas also do that. All the Māyāvādīs they are against me, because I am talking about Bhagavad-gītā as it is, and they screw their own meaning by jugglery of words. So they are all enemies. The Māyāvādī sannyāsīs, smārta-paṇḍitas, all of them. (break) . . . ananda has constructed a śiva-liṅga temple.

Prabhupāda: A temple of . . . there are so many hundreds and thousands of Śiva temples, but nobody has exhibited śiva-liṅga, big śiva-liṅga on the head of the temple.

Akṣayānanda: Where is that, Prabhupāda?

Prabhupāda: It is in Bombay. And he's speaking on Gītār Gān. Gītār Gān means to construct a big śiva-liṅga temple. He's proving himself a rascal by his activities. He is a rascal number one. He has gone many times foreign countries, but not a single foreign student he has got. (break) . . . from atheistic fools who are not prepared to follow any rules and regulation, they are after him. Yes.

Akṣayānanda: Many of those the young boys and girls, they are potential devotees. They are just in it for a bit of fun. A bit of fashion or fun.

Prabhupāda: Yes, he's speaking very nicely. He's fit for that position. Similarly our . . . what is his name?

Prabhupāda: Balavanta. He is also very nice. (break) If we get some important votes in the government, then our mission will be successful. This our philosophy is being properly ventilated. It is coming in the papers, you see. On account of this political leadership. And I see that his statements are published profusely. Not with other contemporaries. And what they'll speak? They have no sense, they have no leadership idea.

Satsvarūpa: Some devotees express that a fear that after some time all these bogus groups, they will start running political men, too, and then the field may be ruined, that . . .

Satsvarūpa: Soon, they say, especially the boy yogī, he always follows whatever we do. When we go out and distribute books, they do; when we have kīrtana, they do. So there's the fear that soon they'll all be running for office, all these bogus men, because we are doing.

Prabhupāda: But they cannot say anything.

Prabhupāda: They have . . . this, the followers of the Bala Yogi, they're simply rascals.

Devotee: They'll just be more exposed . . . they'll have to study your books to find out what to say.

Prabhupāda: They cannot even speak . . . ah?

Devotee: They'll have to study your books to find out what to say.

Prabhupāda: Yes. Just like our . . . what is this? Sai, Sai, Siddhasvarūpa. He also tried to imitate ourself, and by reading, reading, he became my disciple. That's all. Although he has the same mentality still, still he does not find any better solution than in our philosophy. The Karandhara, he went away (chuckles) and does not find any solution. You see?

Satsvarūpa: "I find no alternative to Kṛṣṇa's service," he said.

Prabhupāda: If are successful in America, then all over, everywhere it will be followed. (break) So give him some instruction.

Mahāṁśa: He was a minister. His name is Channa Reddy.

Mahāṁśa: He used to be running for the chief ministership. He's very, very popular, but there was some mischief he did, for which he was taken to court and exposed.

Prabhupāda: What is that mischief he did?

Mahāṁśa: I don't remember exactly, but he was taken to court and exposed, and he was expelled from entering into any . . .

Mahāṁśa: . . . any elections for five years. So now his period is finishing, his five years is finishing, and he is going to stand again, and it seems that he's very, very popular, he has a good chance. And he's our Life Member . . .

Prabhupāda: He studies our books?

Mahāṁśa: Oh, yes, he has taken our books, and he especially asked that, "I am reading these books and please give me." And he attended all the three days of the Exhibition Grounds.

Mahāṁśa: (aside) You maybe remember, no?

Prabhupāda: . . . defect of the modern politicians. Here at the present moment, their philosophy is that one must be very cunning diplomat, then he's successful politician. This is their philosophy. The most crooked man, like Cāṇakya. But our philosophy is that the political head should be like Mahārāja Yudhiṣṭhira, Lord Rāmacandra. That is difference. Here Churchill or Hitler or similar man, crooked man . . . without being crooked one cannot become politician. Lloyd George, the British Prime Minister, he said that "Consistency in politics is the qualification of an ass." Consistency. You must change. (break)

Prabhupāda: Yes. No, "Do not trust" means you are also not trustworthy. Nobody trusts you, and you should also not. That is their philosophy. All these big, big politicians . . . just like United Nation. The same philosophy is going on. Nobody trusts anyone, but they speak big, big. (break) (pause)

Akṣayānanda: Did he mean because the politicians will degrade . . . (break) (end)