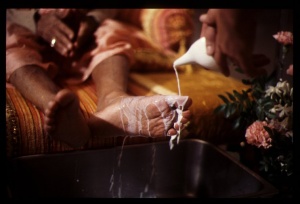 Listen to a 'Nectar Drop' created from this Morning_Walk

Girirāja: He said: "We don't know where the ingredients came from, but we're sure that there's . . ."

Prabhupāda: Then why do you talk nonsense? (laughter) That is another rascal. You do not know. Then what is the use of talking nonsense? You do not know wherefrom these ingredients came. That is nonsense. Our answer is, Kṛṣṇa reveals, ahaṁ sarvasya prabhavo mattaḥ sarvaṁ pravartate (BG 10.8): "The ingredients coming from Me." Now make experiment how the ingredients are coming.

Devotee (1): They say the original ingredients for the explosion, then, according to your definition, is Kṛṣṇa.

Prabhupāda: Kṛṣṇa is the cause of all causes, sarva-kāraṇa-kāraṇam (Bs. 5.1). But He has no kāraṇa.

Prabhupāda: Therefore it is said,

Those who are simply chewing the chewed, they cannot understand Kṛṣṇa. Naisaṁ matis tavad urukramāṅghrīm (SB 7.5.32).

Prabhupāda: Ah. Niskiñcananaṁ mahiyasam. It has to be understood from the same thing, tattva-darśinam. Otherwise it is not possible. You cannot speculate. If you say, as Gandhi said, "My Kṛṣṇa is of my imagination," that kind of knowledge has no value. What you are, your imagination? Matir na kṛṣṇe parataḥ svato vā. Parataḥ svato vā. Vidya-bhāgavatavadhiḥ. If one reads Śrīmad-Bhāgavatam, then he gets the ultimate knowledge of everything. That is the ultimate end, limit of knowledge.

Prabhupāda: Matir na kṛṣṇe parataḥ . . . (SB 7.5.30) Nobody can understand Kṛṣṇa, and they are thinking, "In my imagination, Kṛṣṇa is like this." What is the value of this imagination?

So Ambarīṣa Mahārāja, you are feeling all right or not?

Prabhupāda: You are taking yogurt? (aside:) Give him khicuṛi and yogurt.

Ambarīṣa: No, I eat it with that śādhisav gold(?) mixed in it.

Prabhupāda: No, no. Take yogurt with black pepper and salt. Yes.

Prabhupāda: (aside) Hare Kṛṣṇa. Jaya. Very good. What is your name?

Girirāja: Actually, he comes and dances in ecstasy in the temple.

Girirāja: After the kīrtana we read the Kṛṣṇa book, and his parents want to leave, but he insists on staying.

Yaśomatīnandana: What was that, inquired?

Girirāja: Oh, yes, the scientist. When the reporter asked him where the things come from, he said he doesn't know, but he's sure that he doesn't . . .

Girirāja: But he's sure that they don't need God to explain it.

Prabhupāda: That he knows, how to deny God. That he is expert. And the newspaper reporter accepted this?

Girirāja: No. He didn't express his point of view, but you could see he wasn't satisfied.

Prabhupāda: That is the position. (aside:) Hare Kṛṣṇa. Jaya.

Girirāja: Then he asked him about the future.

Devotee (2): Actually it's sad that if someone says there is no God, then that means that they . . .

Prabhupāda: Yes, immediately. Anyone who says there is no God, then he, immediately he's a dog. That's all.

Prabhupāda: No more words. He is immediately a dog. That's all.

Devotee (2): If he cannot see throughout the entire universe, from one end of the universe to the other, how can he make the statement that there is no God? He cannot see. And yet they are saying, "I don't know."

Prabhupāda: This is reasonable. (break) . . . no God, it is spoken by pāgala, mad, mad. In Bengal it is said, pāgale ki na bale, chāgale ki na khāya. (Hindi) Chāgala, goat.

Brahmānanda: "What the goat does not eat?" Is that?

Brahmānanda: "What the goat does not eat?"

Prabhupāda: It eats everything, goat.

Brahmānanda: "And what the fool will not speak?"

Prabhupāda: Yes. There is no discrimination. We can go this side. Pāgale ki na bale, chāgale ki na khāya. (aside:) Hare Kṛṣṇa.

Yaśomatīnandana: Now all these pāgalas are making such a big noise all over the world.

Indian man (3): What is your idea about the secularism preached by our government of India, and the policy of secularism? What do they mean by that? That means they say that there is no place for religion.

Prabhupāda: Yes. Dharmena hina paśubhiḥ samana. As soon as there is no religion, the population—animal, that's all. That is going on. Because there was no religion, therefore the government has to declare emergency. (laughter) Because all animals. So they created first animals, then emergency. This is going on. (aside:) Hare Kṛṣṇa. Why emergency? If there is human being, then why emergency? All animals. To control the animals you require some special measure. This is the proof that they're animals. Otherwise why? (aside:) Hare Kṛṣṇa. That is long, long ago said, dharmena hina paśubhiḥ samana: "When you give up religion, you are no better than animals."

Indian man (3): What is the harm if I become an animal also?

Indian man (3): So what is the difference between animal and a man?

Prabhupāda: You are good animal. (laughter)

Indian man (3): This is right answer. When you cannot differentiate between man and animal, then that means you are animal.

Prabhupāda: And you admit it—then good animal. (laughter) (aside:) Hare Kṛṣṇa. (break) . . . who has got this bodily conception of life, he is animal. That is the definition of animal.

Prabhupāda: Who is thinking, "I am this body," he is animal.

Prabhupāda: Means anyone who is thinking that, "I am this body."

Prabhupāda: This body. And in body relationship, "She is my wife, she is my child, she is my countrymen, she is my race." So this is dehātmā-buddhiḥ. Yasyātmā-buddhiḥ . . . "This is my country." In this way one is thinking, and little more religiosity, he is going to holy place and taking bath in the river, but not to the person who knows things. Sa eva go-kharaḥ (SB 10.84.13). There are. Sa eva go-kharaḥ. Go means cow, and kharaḥ means ass. This class of men are grouped among the cows and asses.

Prabhupāda: (Hindi) This is animal civilization. There is no spiritual knowledge. Simply like cats and dogs they are working hard, eating, sleeping . . .

Indian man (3): Then what should be the spirit of a man? How do you call him a man?

Prabhupāda: When he knows that he is not this body—he is soul, ahaṁ brahmāsmi—then he begins to become. Then his real identity. . .

Indian man (3): That means ninety-nine, ninety percent of the people living in the world are practically animals.

Prabhupāda: Very good analysis. Why asses? And you load the ass with as much cloth, washerman, and he cannot move. But he will go on, and the washerman will give, after that, little grass, and he will stand there up to the evening again to be loaded. The ass does not know that, "This much grass I can get anywhere. Why I have become servant of this washerman?" Therefore he is ass. He will eat two cāpāṭi, but he is working like an ass whole day.

Prabhupāda: That's all. So if the ass, he will eat a little grass, which can be had anywhere, but he is working for the washerman. Therefore he is ass.

Prabhupāda: No, no, that egoism also ass has got. That egoism is there in ass also.

Prabhupāda: Any animal, he knows that "I am ass." Dog knows, "I am dog." Similarly, if you know "I am Hindu," "I am Mussulman"—the same conception. What is the difference? If a dog thinks "I am dog," and if you think that you are Indian, then where is the difference? Simply by changing the name you become very big man? The conception is the same.

Indian man (3): That point is not clear.

Prabhupāda: It is not problematic. It requires the association. Association, teacher, then it will be possible.

Indian man (3): Association is most necessary.

Girirāja: No. Then he asked him about the future.

Girirāja: He said the population will go on increasing more and more, and there won't be enough food, so everyone will starve.

Prabhupāda: He said, the scientist. Then what your scientific knowledge will help?

Brahmānanda: Well, if they drop some bombs they will reduce the population. (laughter)

Prabhupāda: That is very easy. The bomb is also ready. Everyone has got now nuclear weapon, bomb. So the scientists gave the solution. So what is the use of scientific knowledge? This is going to happen.

Brahmānanda: Actually there was one proposal, it was written in the seventeenth century in England by one famous writer, that "Because the population is increasing so much, therefore if we become cannibals, then the population will be maintained."

Yaśomatīnandana: So who will eat who?

Brahmānanda: Well, that he didn't say.

Prabhupāda: These are scientists, big men.

Girirāja: So the reporter asked him what were his personal plans for the future. So he said he likes one girl, so he wants to get married, and that's all.

Prabhupāda: Our plan is the best, because before meeting such catastrophes, go back to home, back to Godhead. This is the best. They are seeing the catastrophe, but they have no way to escape. That is the difference between them and ourselves. (aside:) Jaya. Hare Kṛṣṇa. Jaya. (break) . . . said that, "There is no need of God, but there is need of girl, of a girl." He said that. Yes. Then what is the difference between a scientist and a dog? The dog also does not know what is God, but another female dog he wants. Huh? What is the difference? Sa eva go-kharaḥ (SB 10.84.13). Then it is proved that he is no better than animal. The animal requires another opposite sex, but he does not know God. Then where is the difference? (break)

Brahmānanda: You know that the Detroit house, the house in Detroit? The president, he wrote in his letter—I neglected to ask you—he wanted to have a name for that temple.

Brahmānanda: So Ambarīṣa Prabhu says that he was thinking of New Keśighāṭa, because it's situated near the water.

Prabhupāda: Keśighāṭa we have already given in New . . .

Ambarīṣa: It's right on a river. (break)

Prabhupāda: . . . name that . . . Kṛṣṇa . . . They brought the assembly house from heaven and located in Dvāraka. There is a name like that. I shall give you the name. (break)

Brahmānanda: . . . robi. You can give a name for Nairobi mandir.

Ambarīṣa: What does it mean?

Prabhupāda: Vṛndāvana is not black. (laughter) People have come less due to candra-gana (?). (break) Kirātuddhara.

Brahmānanda: The Africans, if they ask what is the meaning of that, they might object.

Prabhupāda: Just like the queens of Dvāraka were plundered by the ābhīra. That's why. (pause) There is no pasturing ground. Otherwise this cow would have been taken there. He would have eaten grass, that's all. What she will eat here in the town? Even Sumati Morarji's cows, they are not healthy. (Hindi conversation) (pause) It appears to be so, because in the evening the milk, whatever you give me, that appears to be powdered milk.

Brahmānanda: It was powdered milk?

Prabhupāda: It appears. Now it is confirmed.

Yaśomatīnandana: Maybe we should have our men stand there and milk and get directly from . . .