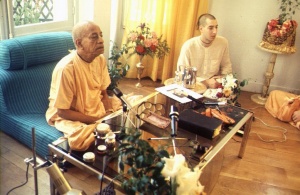 So Kṛṣṇa, when found Arjuna, that he was in the battlefield and Kṛṣṇa Himself is guiding him and becoming the chariot driver, and He saw that "Arjuna is declining fight?" He became surprised. So He chastised him, kutas te kaśmalam idaṁ viṣame samupasthitam anārya-juṣṭam (BG 2.2). Āryan, ārya, ārya. "So this is not for a gentleman, business. You are behaving like non-Āryans." Non-Āryan. So this is the difference between culture and nonculture, that . . . There is a Bengali proverb that one girl was to dance on the stage. So in Indian civilization the girls or the woman, they cover their head with, from superiors. So nachte boshe ghumtano. She has gone to dance on the stage, and she is pulling on the veil. "Now, where is the opportunity of here to become a household wife? You have come to dance." So similarly, Arjuna was chastised, that "You have come to fight, and now you are becoming very nonviolent, atheist . . . er, theist. What is . . .? So this is anārya. You have to do your duty in proper place." That is Āryanism. That is ārya. Ārya-samāj means one who knows his duty, how to do it in proper time. So kṣatriya, his duty is to fight, to defend from the hands of the enemy. So he was declining to fight, so He chastised him, "Non-Āryans. You are not Āryan."

So here Śukadeva Gosvāmī says, "My dear king, if a diseased person eats the pure, uncontaminated food prescribed by a physician, he is gradually cured, and the infection of disease can no longer touch him. Similarly, if one follows the regulative principles of knowledge, he gradually progresses towards liberation from material contamination." This is the translation of the . . . Nāśnataḥ pathyam. Pathyam. Pathyam means good foodstuff, not "Anything I can eat." That is the business of the hogs and dogs. Just like hogs have no discrimination. Anything, up to stool you give him, it will eat. That is not human civilization. Although it is the law of nature that ahastāni sahastānām, vegetables or animals who has no hand . . . Just like ordinary animals, they have got four legs, no hand. So these four-legged animals is the food for the two-legged animals. Ahastāni sahastānām. Uncivilized men means two-legged animals. They are animals, but two-legged. There are four-legged animals; there are two-legged. So ahastāni sahastānām apadāni catuṣ-padām (SB 1.13.47): "And living entities who have no legs," just like the vegetables, grass, plants, trees; they have no legs. They cannot move, but they are living entities. They are food for catuṣ-padām, for the animals who have got four legs. Ahastāni sahastānām apadāni catuṣ-padām, phalgūni mahatāṁ tatra: "And the weak is food for the strong." Phalgūni . . . Jīvo jīvasya jīvanam (SB 1.13.47). This is the law of nature, that one life is meant for maintaining another life. That is going on.

So sometimes they put forward this argument that "You are also eating vegetables. They have got life. Why you object that nonvegetarians, who are eating four-legged animals . . .?" No. We are not going to infringe to the laws of nature. That is not our business. You can eat four-legged animals, because you are also animal. But when we speak of civilized animals . . . Civilized, not animal. That is human being. So long one is not civilized, he is animal. And the civilization begins when one understands that he is not this body. That is the beginning of civilization. Yasyātma-buddhiḥ kuṇape tri-dhātuke (SB 10.84.13). So long one is in ignorance, the bodily concept of life, he is animal. When one knows that "I am not this body; I am . . . Ahaṁ brahmāsmi," then civilization begins.

So here it is recommended that unless we follow the rules and regulations, then there is no possibility of curing our material disease. The whole process is we are in materially diseased; otherwise we are as good as Kṛṣṇa. But because we are materially diseased, we are in the difficult position of birth, death, old age and disease. Kṛṣṇa says. This is real problem. Janma-mṛtyu-jarā-vyādhi-duḥkha-doṣānudarśanam (BG 13.9). So if we want to be cured from this disease, then we have to follow rules and regulation. Just like a patient, if he wants to be cured from the disease, he has to follow the rules and regulation prescribed by the physician. Therefore law, religion, Vedic scripture, they are all meant for human being, not for the cats and dogs. Even ordinary law, they are meant for human being. Just like on the street it is "Keep to the right." So this is for the human being. If the cats and dogs goes from right to the left or wrong, they are not prosecuted. The law is meant for the human being. If the human being does not follow rules and regulative principle, law, then he's animal.

So civilized means to raise oneself from the animal status of life to the human status life. That means rules and regulations. Nāśnataḥ pathyam evānnaṁ vyādhayo abhibhavanti hi, evaṁ niyamakṛd rājan. Niyama. Niyama means regulation. We have to follow the rules and regulation. That is compulsory. That is human. In the Caitanya-caritāmṛta you'll find this verse, anādi bahirmukha jīva kṛṣṇa bhuli gela, ataeva kṛṣṇa veda-purāṇa karilā (CC Madhya 20.117). The purport is that our disease is that we have forgotten God. The more we are forgetful about God, the more we are animals. And the more we become advanced in understanding God, Kṛṣṇa consciousness, then we are human being. And if we are more advanced, then you are devatā, demigods. And when you more make advance, then you become fit for going back to home, back to Godhead. This is the process.

So real civilization is how to go back to home, back to Godhead. But they do not know. Na te viduḥ (SB 7.5.31). The materialistic persons, they do not know. Therefore there must be organization, institution, to teach the human society how to go back to home, back to . . . That is real civilization. Otherwise cats and dogs, they are also eating, sleeping, mating, getting children and dying. That is not human civilization. In the next verse we'll find that human civilization can be attained. The first thing is, thirteenth verse, tapasa, "by austerity."

These are the different steps, how one person can become civilized. So first thing is tapasā. Tapasā brahmacaryena (SB 6.1.13), austerities. Therefore in the Vedic civilization the children, they are taught from the very beginning brahmacarya, tapasā brahmacarya. A small boy, five-years-old boy . . . That is gurukula. Brahmacārī guru-kule vasan dānto guror hitam (SB 7.12.1). This is a way of life, to teach the brahmacarya, brahmacarya, celibacy, to restrain from sex life. That is brahmacarya.

Brahmacārī is taught from childhood how to keep brahmacārī, brahmacarya. This is the . . . Anyone who is taught from the beginning of life, "No sex life," then at young age he can control. If you still one cannot control, that . . ., this gṛhastha life is a concession for sex life. Actually, sex life is not required for advancement of civilization. That is advancement. Why? That if so long we are attached to sex life, we have to remain within this material world—in any form. There are eight million four hundred . . . Puṁsaḥ striyā mithunī-bhāvam etaṁ (SB 5.5.8). This is . . . Material world means sex desire. So if one wants to become fit candidate for going back home, back to . . .: no more sex life. That is civilization.

So sannyāsa means perfectly no more sex life. Vāna . . .It begins from vānaprastha, retired. It is taught in the brahmacārī. Only in the gṛhastha, restricted sex life; only for begetting nice children. Otherwise, no sex life. Dharma aviruddhaḥ kāmo 'smi (BG 7.11), in the Bhagavad-gita. Dharma aviruddhaḥ means only for getting nice children one should have sex; otherwise no. And in another place it is restricted that one should not become father, one should not become mother, if the parents cannot give protection to the children from the danger of birth, death, old age and disease. This is Vedic contraception, that if you are competent to give instruction to your children how to avoid the cycle of birth, death, old age and disease, then you become father. Otherwise don’t become father, don’t become mother.

So this is the way of civilization, Vedic civilization. It is, nowadays it is very difficult to follow. But it can be followed, provided one is Krsna conscious. Otherwise you cannot follow. Thank you very much. (kirtan) (end).