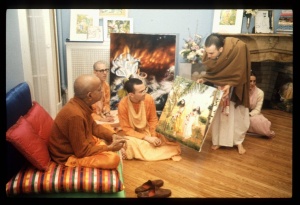 Pradyumna: Translation: "Nārada Muni continued: O King, although the exalted devotee Prahlāda Mahārāja was only a little boy, he accepted Lord Brahmā's words. He gradually proceeded toward Lord Nṛsiṁha-deva and fell down to offer his respectful obeisances with folded hands."

So this Prahlāda Mahārāja is mahā-bhāgavatam, mahā-bhāgavata, not because he is now five years old. No. He was mahā-bhāgavata from the womb of his mother. When his mother was attacked by the demigods, arresting, and was being dragged by the devatas, Nārada Muni was passing there: "What you are doing?" And "She is the wife of Hiraṇyakaśipu, and she has got a child in the womb. So we want to kill that child also." Nārada Muni immediately asked them, "No, no, no, no. He's not ordinary child. He's mahā-bhāgavata. So don't touch." So they agreed. Nārada Muni . . . This is devatā. Although did some mistake, as soon as Nārada Muni ordered them that "Don't try to harm. He is mahā-bhāgavata," immediately . . . So Nārada Muni said, "My dear daughter, you come with me until your husband comes back." Hiraṇyakaśipu went to perform very severe austerities to defeat the demigods. This is demon's austerities. Hiraṇyakaśipu was engaged in very severe type of austerity. What is the purpose? Some material purpose.

But that type of austerity, tapasya, is useless. Śrama eva hi kevalam (SB 1.2.8). The materialists, they take austerities. Unless they do that, they cannot improve either in the business field or in economic field or in political field. They have to work very, very hard. Just like in our country the great leader Mahatma Gandhi, he had to work very, very hard. Twenty years in Durban he spoiled his time, and thirty years in India. I shall say spoiled his time. What for? For some political purpose. What is his political purpose? "Now we are a group called by the name Indian. We must drive away the Englishmen and take the supreme authority." This is purpose. So this is anyābhilāṣitā-śūnyaṁ (CC Madhya 19.167). What is this purpose? Today you are Indian; tomorrow you may be something else. Tathā dehāntara-prāptiḥ (BG 2.13). You have to change your body. So what is the next body? Are you going to be again Indian? No guarantee. Even if you have got very much affection for India, all right, according to your karma you'll get body. Even if you get the Indian body of a tree, then you will stand up for five thousand years. What is the benefit? Kṛṣṇa says tathā dehāntara-prāptiḥ. He does not say that a human being is going to be again a human being. There is no guarantee. Some rascals they say that once getting this human body, he does not degrade. No. That is not the fact. The fact is that out of 8,400,000's of different species of life, according to your karma you'll get a body. That's all. No guarantee that you have . . . And even if you get Indian body, who cares for you?

So without Kṛṣṇa consciousness, whatever austerities, penances we perform, it is simply useless waste of time. We should know. Simply waste of time. Because you have to change your body. Everything will be changed. You have come naked; you have to go naked. You cannot gain. Mṛtyuḥ sarva-haraś cāham (BG 10.34). Sarva-haraś ca. Whatever you have acquired, everything will be taken away. Mṛtyu . . . Just like Hiraṇyakaśipu. Hiraṇyakaśipu, whatever he had acquired, Prahlāda Mahārāja said, "In a second, You took away. So, my Lord, why You are offering me this material benediction? What is the value of it? I have seen my father: simply by his eyebrows' twinkling the demigods would be afraid. Such position You have finished in a second. So what is the use of this material position?"

So therefore those who are pure devotee, they do not aspire anything material. That is not their . . .

We should always remember that. Don't bring any material desire in executing devotional service. Then it is not pure. Na sādhu manye yato ātmano 'yam asann api kleśada āsa deha (SB 5.5.4). As soon as you bring in material desires, then you have wasted your time. Because you'll have to get a body. Your desire will be fulfilled. Kṛṣṇa is so kind—ye yathā māṁ prapadyante tāṁs tathaiva bhajāmi (BG 4.11)—if you want to fulfill some desire by bhakti, Kṛṣṇa is very kind: "All right." But you have to take another body. And if you are pure, simply, tyaktvā dehaṁ punar janma naiti mām eti (BG 4.9). This is wanted, pure devotee. Therefore we advise everyone to become a pure devotee. Pure devotee . . . This is the example, mahā-bhāgavata. This five-years-old boy, he had no business except to satisfy, to become a pure devotee of Kṛṣṇa.

So this very qualification, pure devotee, makes one mahā-bhāgavata. But there are stages. The mahā-bhāgavata from the very birth, that is called nitya-siddha. They are eternally siddha, perfect. They come for some purpose. So Prahlāda Mahārāja came for this purpose, that the demons, even he's his father, he would give him so many troubles because one is Kṛṣṇa conscious. This is the instruction. Prahlāda Mahārāja wanted to show this by the order of Kṛṣṇa. Hiraṇyakaśipu also came—how to become enemy of Kṛṣṇa; and Prahlāda Mahārāja came, show, to show how to become a devotee of . . . This is going on.

But one must make advance. This is advancement of devotional service. By simply we remain stuck up in Deity worship, we do not feel for others—na cānyeṣu na tad-bhakta—you do not know who is devotee, how to worship him, then we remain kaniṣṭha-adhikārī. And madhyama-adhikārī means he must know his position, others' position, devotee's position, God's position, and that is madhyma-adhikārī. Īśvare tad-adhīneṣu bāliśeṣu dviṣatsu ca (SB 11.2.46). He'll have four kinds of vision: Bhagavān, īśvara; tad-adhīneṣu, he's one who has taken shelter of Bhagavān—that means devotee—īśvare tad-adhīneṣu; baliśu, innocent children, just like these children, baliśa, arbhakaḥ; and dviṣatsu, envious. A madhyama-adhikārī can see these four different persons, and he deals with them differently. What is that? Prema-maitrī-kṛpopekṣā. Īśvara, to love God, Kṛṣṇa, prema. And maitrī. Maitrī means to make friendship. One who is devotee, we should make friendship with him. We should not be envious; we should make friend. Maitrī. And innocent, just like these children, kṛpa—to show them mercy, how they'll become devotee, how they'll learn chanting, dancing, give them food, give them education. This is called kṛpa. And last, upekṣā. Upekṣā means those who are envious, don't take; don't associate with them. Upekṣā. "No, let him . . ."

So we should take lesson from Prahlāda Mahārāja that if a child becomes a devotee in the family, he is the best child, the best. He is giving the best service to the family. But the rascals, they are taking otherwise, that "My son has become devotee. Bring him back by deprogramming, by kidnapping." People are so rascal. You see? They do not take it a great benefit that "My fortunate son has become a devotee. My whole family will be delivered." But they have no knowledge. They have no brains. Therefore I say it is not brainwashing, it is brain-giving. They have no brain. (laughter) So take it very seriously and do nicely.