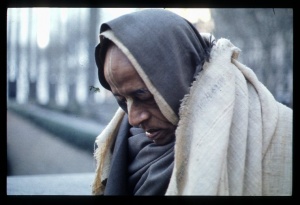 O Hṛṣīkeśa, the world becomes joyful upon hearing Your name and thus everyone becomes attached to You. Although the perfected beings offer You their respectful homage, the demons are afraid, and they flee here and there. All this is rightly done.

Arjuna, after hearing from Kṛṣṇa about the outcome of the Battle of Kurukṣetra, became an enlightened devotee of the Supreme Lord. He admitted that everything done by Kṛṣṇa is quite fit. Arjuna confirmed that Kṛṣṇa is the maintainer and the object of worship for the devotees and the destroyer of the undesirables. His actions are equally good for all. Arjuna understood herein that when the Battle of Kurukṣetra was being concluded, in outer space there were present many demigods, siddhas, and the intelligentia of the higher planets, and they were observing the fight because Kṛṣṇa was present there. When Arjuna saw the universal form of the Lord, the demigods took pleasure in it, but others, who were demons and atheists, could not stand it when the Lord was praised. Out of their natural fear of the devastating form of the Supreme Personality of Godhead, they fled. Kṛṣṇa's treatment of the devotees and the atheists is praised by Arjuna. In all cases a devotee glorifies the Lord because he knows that whatever He does is good for all.