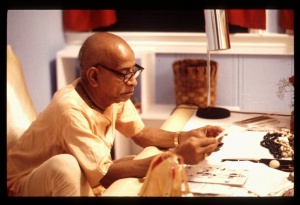 O gentle lady, when I present you with the head of that brāhmaṇa, after beheading him with arrows from my Gāṇḍīva bow, I shall then wipe the tears from your eyes and pacify you. Then, after burning your sons' bodies, you can take your bath standing on his head.

An enemy who sets fire to the house, administers poison, attacks all of a sudden with deadly weapons, plunders wealth or usurps agricultural fields, or entices one's wife is called an aggressor. Such an aggressor, though he be a brāhmaṇa or a so-called son of a brāhmaṇa, has to be punished in all circumstances. When Arjuna promised to behead the aggressor named Aśvatthāmā, he knew well that Aśvatthāmā was the son of a brāhmaṇa, but because the so-called brāhmaṇa acted like a butcher, he was taken as such, and there was no question of sin in killing such a brāhmaṇa's son who proved to be a villain.