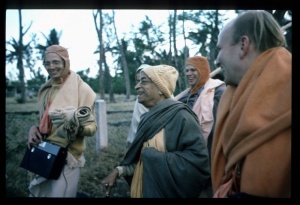 From the body of the gigantic python, a glaring effulgence came out, illuminating all directions, and stayed individually in the sky until Kṛṣṇa came out from the corpse's mouth. Then, as all the demigods looked on, this effulgence entered into Kṛṣṇa's body.

Apparently the serpent named Aghāsura, because of having received association with Kṛṣṇa, attained mukti by entering Kṛṣṇa's body. Entering the body of Kṛṣṇa is called sāyujya-mukti, but later verses prove that Aghāsura, like Dantavakra and others, received sārūpya-mukti. This has been broadly described by Śrīla Viśvanātha Cakravartī Ṭhākura with references from the Vaiṣṇava-toṣaṇī of Śrīla Jīva Gosvāmī. Aghāsura attained sārūpya-mukti, being promoted to the Vaikuṇṭha planets to live with the same four-armed bodily features as Viṣṇu. The explanation of how this is so may be summarized as follows.

The effulgence came out from the python's body and became purified, attaining spiritual śuddha-sattva, freedom from material contamination, because Kṛṣṇa had stayed within the serpent's body, even after the serpent's death. One may doubt that such a demon, full of mischievous activities, could attain the liberation of sārūpya or sāyujya, and one may be astonished about this. But Kṛṣṇa is so kind that in order to drive away such doubts, He had the effulgence, the individual life of the python, wait for some time in its individuality, in the presence of all the demigods.