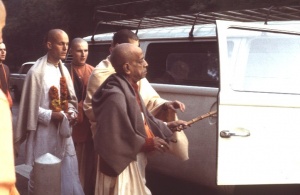 Thereafter, everyone being pleased, the demigods began to shower flowers from Nandana-kānana, the celestial dancing girls began to dance, and the Gandharvas, who are famous for singing, offered songs of prayer. The drummers began to beat their kettledrums, and the brāhmaṇas offered Vedic hymns. In this way, both in the heavens and on earth, everyone began to perform his own duties, glorifying the Lord.

"Learned sages have definitely concluded that the infallible purpose of the advancement of knowledge, austerity, Vedic study, sacrifice, the chanting of hymns, and charity is found in the transcendental descriptions of the qualities of the Lord, who is defined in choice poetry." (SB 1.5.22) This is the perfection of life. One should be trained how to glorify the Supreme Personality of Godhead by one's respective qualities. Education, austerity, penance or, in the modern world, business, industry, education and so on-all should be engaged in glorifying the Lord. Then everyone in the world will be happy.

Kṛṣṇa comes, therefore, to exhibit His transcendental activities so that people may have the chance to glorify Him in every respect. To understand how to glorify the Lord is actual research work. It is not that everything should be understood without God. That is condemned.

Without bhagavad-bhakti, without glorification of the Supreme Lord, whatever we have is simply a decoration of the dead body.